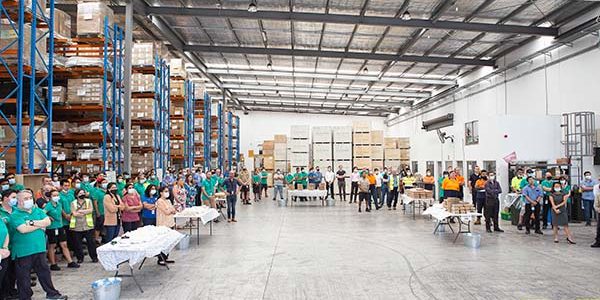 Defence, space and communications manufacturer Electro Optic Systems delivered a record number of its key products – remote weapons systems and satellite terminals – in the December quarter. The Canberra company expects orders delayed during the Covbid-19 pandemic to be let over the next year and has been investing in infrastructure, management, security, quality, compliance finance, IT and cyber to support higher production levels. R&D has continued on directed energy (laser) weapons, and counter drone and lethality offerings for its remotely operated weapons platforms. EOS also invested $37 million in its SpaceLink business in 2021 which plans an initial constellation of four satellites to be launched in 2024.

Crop protection and seed product manufacturer Nufarm reported revenues rose 36 per cent during the first quarter of FY22 compared to the previous corresponding period. The company pointed to favourable weather conditions for agriculture and continuing strong demand for its products in all regions. Nufarm is experiencing upward pressure on costs due to raw material costs and global logistics challenges. The company is ‘increasingly confident of revenue and earnings growth for the full FY22 financial year’.

Medical device manufacturer Nova Eye Medical has reported strong and continued growth in Germany and China as it steps up sales effort for its ophthalmic treatment devices. The company announced sales of $6.5 million in the six months to December 2021 of glaucoma surgical devices, 1.6 per cent up on the previous corresponding period. Nova Eye is currently training surgeons in Europe on the use of a new generation of canaloplasty technology for glaucoma treatment, iTrack Advance. CEO Tom Spurling said factors in growth were investment in a direct sales team in Germany and sustained effort by the company’s China distributor.

Quantum computer chip developer Archer Materials has announced that mobile chip compatible technology has been used to detect quantum information stored in a room temperature quantum device for the first time. The company dubbed the news a ‘major technical feat’ that paved the way for control of qubits, the the sub-atomic sized features of quantum computer chips that are used to store and retrieve information. Archer has been developing its CQ chip technology with the announcement the latest in a long line of claimed technical advances. The company has $29 million in cash and said it was well funded to progress CQ chip development.

The Clean Energy Finance Corporation (CEFC) will provide $300 million in support through the new Timber Building Program, which will promote the use of low-carbon engineered wood materials in apartments and office buildings to reduce construction-related emissions. Production and delivery of building materials is estimated to represent 28 per cent of emissions in the construction industry globally. The CEFC, which invests on behalf of the federal government, said the program was based on research confirming the critical need to transform the sector, and would provide $300 million in debt finance for eligible projects Australia wide – including commercial offices, retail, industrial, healthcare and education.

Life Sciences company Cytiva has announced the winner of its first BioChallenge for Australia and New Zealand from among 32 proposals from academic institutions and start-up companies. Therapies developer VivaZome Therapeutics took the top prize valued at approximately $200,000. VivaZome CEO, Professor David Haylock, said his company aimed to be a global leader “in providing novel, valuable and safe exosome-derived therapies for devastating and life-threatening diseases.”

Strike Energy has been granted Major Project Status for the $3 billion Project Haber urea manufacturing facility near Geraldton, Western Australia. The project would create a planned 1.4 million tonnes per annum of urea.” Urea is the most commonly used solid nitrogen fertiliser. The facility could support as many as 1,135 full-time jobs a year in a three-year construction period and 300 over its 30-year life, said industry minister Angus Taylor, as well as “deliver significant emissions reduction to Australia’s urea manufacturing sector through the use of advanced ammonia and gas processing technology, as well as dedicated clean hydrogen.”

EleXsys Energy has attracted $451,167 in funding from the Australian Renewable Energy Agency to demonstrate the potential of its technology to increase distributed energy resources (DER) hosting capacity on low-voltage power lines. The eleXsys device works “by regulating voltage on low voltage power lines by dynamically providing or absorbing reactive power, for the benefit of new and existing DER customers where the device is installed.” The trial is valued at $1.92 million and will involve distribution network service provider Energy Queensland, which would undertake testing of eleXsys at its Real Time Digital Simulator facility in Cairns to show how the device performs across a wider range of network types. eleXsys Energy will manufacture and install five devices, with three being directly connected to Energy Queensland’s network, one trialled behind the meter on a customer’s premises, and another used for testing at the Real Time Digital Simulator facility.

The second round of the Tasmanian government’s Accelerating Growth Grant Program has opened, offering grants between $10,000 and $100,000 to manufacturers in the state with annual sales between $500,000 and $30 million. Grants provide up to 50 per cent support for the purchase of new equipment. Applications close on March 25, with further information available at Business Tasmania’s website.

Australian switchgear engineering and manufacturing firm NOJA Power marked a 20-year anniversary at their Brisbane factory this week (pictured.) NOJA exports to 104 countries, manufactures at four sites, and has grown to be “to be one of the largest manufacturers of Reclosers in the world,” said founder and Managing Director Neil O’Sullivan. “We’d like to thank and acknowledge all of our stakeholders, including our most valuable asset, our employees, and our global customer base for trusting us to supply their medium voltage pole mounted Recloser requirements.” NOJA’s successes include Prime Minister’s Australian Exporter of the Year in 2009 and making the list of Most Innovative Companies in Australia in 2018 and 2019.