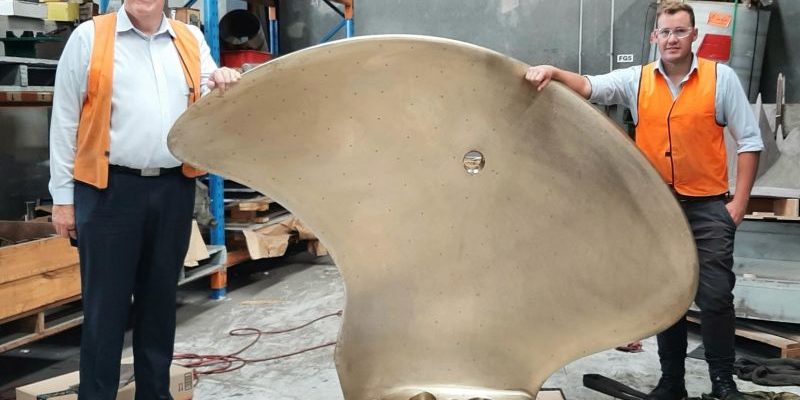 Perth marine engineering firm VEEM has completed casting and machining of the largest propeller ever produced by the company – and also the largest ever made in Australia (picture). Weighing in at around 1,500kg and manufactured with very high tolerances, the Controllable Pitch Propellor was commissioned by Norwegian company Kongsberg Maritime for a defence vessel. According to VEEM: “It will deliver extreme performance for extreme conditions.” VEEM is best known for its marine gyrostabilisers and propellers which are used on luxury yachts and offshore workboats.

Savic Motorcycles’ Savic C-Series electric motorbike has won the Victorian Premier’s Design Award of the Year, exceeding all four criteria for the awards including design process, design excellence, design innovation and design impact. The C-Series is based on café racers from the 1970s, and is over 80 per cent recyclable cast aluminium. The judges commented that “The Savic C-Series range represents the best of design and cutting edge-innovation in the state of Victoria [and]…combines simple and clever electric vehicle architecture and technology with the soul of a vintage café racer. Every detail of this product has been beautifully designed and executed.”

Advanced digital design and visualisation technologies are at the heart of an initiative by Flinders University and technology company Cisco called “Innovation Central Adelaide”. Launched by defence industry minister Melissa Price, the centre designed to nurture innovation through business problem-solving has been established at Flinders University’s new Digital Transformation Laboratory at the Tonsley Innovation District. Pro Vice-Chancellor of Research Innovation Professor John Spoehr said: “It further reinforces the world-class expertise that Flinders researchers are contributing to the evolution of advanced manufacturing in South Australia, supporting jobs and the economy. We have companies champing at the bit to do better, but they lack capacity – Innovation Central Adelaide gives them that capacity, supporting them to apply cutting edge design processes, rapid prototyping, simulation, and high-tech visualisation technologies that would otherwise be beyond their reach.”

Road signage and traffic management systems manufacturer Traffic Technologies has won an initial $1.3 million order to supply advanced LED streetlights for the Southern Sydney Regional Organisation of Councils. More than 92,000 main road and residential street lights will be upgraded across the organisation’s 33 Sydney councils over the next three years. They will form a part of a major upgrade announced by the organisation and Ausgrid. Traffic Technologies managing director Con Liosatos said: “The most advanced smart city enabled streetlights will generate significant savings to councils…as well as substantial reductions in greenhouse gas emissions, along with accommodating future smart city sensors.” The councils can expect savings of 56 per cent annually, with total reductions in greenhouse gas emissions of more than 34,000 tonnes of CO2 per year.

BevChain is trialling electric vehicles with major customers, and this week introduced Sydney’s first electric beer truck to the BevChain Lion fleet. The Fuso eCanter will deliver kegs and packaged Tooheys New beer to pubs, bars, and clubs in metropolitan Sydney. Based on anticipated usage, at least 60 tonnes of carbon dioxide equivalent emissions can be avoided annually compared to the same size Euro 6 diesel powered truck. BevChain President, Misha Shliapnikoff said the truck’s operation is underpinned by BevChain and parent company Linfox Logistics’ Leading the Way 2025 business strategy, as the transport and distribution leader strives to Act Sustainably through its GreenFox programme. Shliapnikoff said: “BevChain is excited to introduce the first electric truck for Lion. This truck will be powered by clean energy from our automated distribution centre, which is situated strategically next to the Lion brewery in Auburn, NSW.”

Anti-cancer treatment company Imugene has received Western Institutional Review Board (WIRB) approval to commence a Phase I clinical trial of its oncolytic virotherapy candidate, VAXINIA (CF33-hNIS, HOV2) in multiple solid tumours in patients. The start of our USA VAXINIA study is a significant milestone for Imugene and clinicians treating those faced with metastatic advanced solid tumours. Imugene has also announced its collaborators at City of Hope hospital have confirmed the Phase I clinical trial of the company’s oncolytic virotherapy candidate, CHECKvacc (HOV3, CF33-hNIS-anti-PDL1), will proceed to the second dose cohort. Imugene CEO Leslie Chong said: “Myself and the team at Imugene are pleased with the results that we have seen so far with no observed toxicity with early encouraging results in oncolytic virus infection and replication in the triple negative breast cancer tumours.”