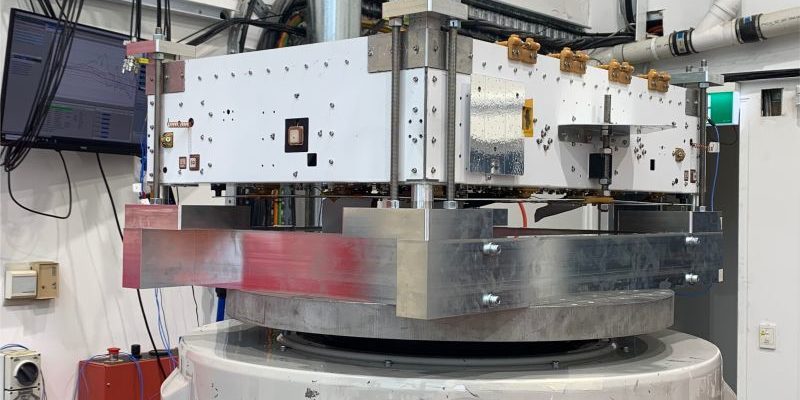 Skykraft has successfully completed vibration and thermal testing of one of its Block II constellation spacecraft (pictured) at Vipac Engineers & Scientists. The Australian developed and manufactured smallsats will replace ground-based infrastructure for Air Traffic Management with space-based systems, for both surveillance and communication services. Built in Skykraft’s new manufacturing facility in Canberra, the purpose of the testing the spacecraft was to validate finite element models and the individual spacecraft sub-systems. Skykraft will now progress to environmental testing of the payload. In 2020 Skykraft signed a Memorandum of Understanding with Airservices Australia to demonstrate space-based surveillance and communication technologies for aviation. The company’s system allows for the reduction in separation between aircraft over oceanic airspace, enhancing efficiency and delivering environmental benefits.

Aqua Aerem plans a green hydrogen production facility at Tennant Creek in the Northern Territory utilising electrolysis of water produced from the atmosphere. The company said its US $10.75 billion, 10GW Desert Bloom Hydrogen project would reduce the cost of green hydrogen through significantly reducing capital and operating costs. Aqua Aerem said producing water from air would be cheaper than the alternatives, and allow green hydrogen production costs to fall below US$2/kg by 2027. Desert Bloom is made up of 2MW Hydrogen Production Units, a proprietary water producing unit, solar PV panels, an electrolyser, and a concentrated parabolic trough solar thermal heater. According to the company said there is still water in desert air, solar radiation is high in the region and: “The hotter the air, the more moisture it is able to hold.” Aqua Aerem is working with Osaka Gas on marketing planned production of 410,000 tonnes of green hydrogen per year when in full operation.

The US Navy and Austal USA are to develop a new class of medical ship, smaller and more flexible in service compared to the USN’s current two, very large hospital ships Comfort and Mercy. According to a report in breakingdefence.com the vessel, which Austal calls an Expeditionary Medical Ship (EMS), would be based on a 120-meter aluminium catamaran and derived from the expeditionary fast transport vessels Austal currently builds for the USN at its shipyard in Mobile, Alabama. EPF-14 was constructed with a portion of seating converted into a medical area capable of housing an operating theatre. The ship is designed to have the capabilities of a hospital ship, but be smaller, allowing the navy to field more of the vessels in more locations. Comfort and Mercy are often employed on humanitarian missions, but there coverage is limited as only one is stationed on the east and west coasts of the US. Austal has been working on the ship design for some time, with the fiscal 2022 defence spending bill including funding for the Navy to begin working with the company.

Woolworths supermarkets in South Australia have launched new compostable fruit and vegetable bags manufactured from corn starch by Melbourne-based Biobag, replacing single-use plastic bags. Most local councils in Adelaide allow recycling of kitchen food waste, with Biobag suitable for composting by disposal in household waste caddies. Assistant state manager at Woolworths SA Elisha Moore said: “SA leads the nation in household access to council-provided composting, so it’s a great place to launch sustainable initiatives like these new bags.” Up to 70 tonnes of plastic waste could be diverted from landfill each year. Food waste sent to landfill creates methane because of conditions underground, but in SA most is turned into garden compost. Biotuff is a member of the Australian Bioplastics Association.