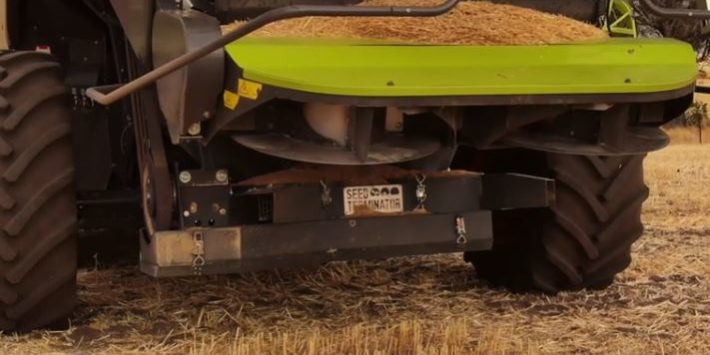 Seed Terminator’s non-chemical weed control equipment is making waves on farms with its technology that destroys weed seeds during harvesting. The Seed Terminator (pictured) is attached to a combine harvester and processes material before it is returned to the soil. Seed Terminator’s Mark Ashenden said: “It basically smashes the bejesus out of weed seeds and spreads them back as natural nutrients back onto the soil.” This reduces the need for crop spraying and lifts yields as crops no longer have to compete with weeds. The company began 11 years ago when founder Nick Berry began PhD studies at the University of South Australia, with the outcome a commercial product. Seed Terminator has notched up $1 million in exports in the past four years, and has a potential market of 8,000 harvesters in Australia alone.

A programme of works updating amphibious Landing Ship Dock HMAS Choules has successfully undocked as scheduled after the completion of her programme of works. The undocking marks the half-way point of Refit Period 21 (RP21) where Atlantic & Peninsula Australia are simultaneously delivering a sustainment work package at the same time as the installation of numerous major capability enhancements for the SEA3030-2 Capability Assurance Project (CAP). This project is likely the largest ship repair conducted in Sydney in the past 15 years and will span over 300 days, cost approximately $90m and be delivered by over 80 suppliers with up to 400 personnel involved each day.

Diagnostic test systems manufacturer Universal Biosensors has launched an entitlement offer to shareholders to raise $20 million via the issue of CHESS depositary receipts, a financial tool similar to owning shares in a company. The company is also in the process of undertaking a placement of new CDI’s to institutional investors to raise $5 million. The fully underwritten raising will accelerate product development, scale up manufacturing and R&D capabilities and for working capital. UBI markets its Sentia wine testing platform device which tests wine for sulphur dioxide, glucose, malic acid and other components of wine, using technology applicable in other areas of testing. CEO Jim Sharman said the UBI was at a point of expanding to a number of ‘company changing addressable market opportunities’.

The Western Australian government has announced the completion of a feasibility study for a green hydrogen plant in the City of Cockburn. The study investigated the use of green hydrogen to displace fossil fuels in the city’s operations, including fleet and administrative buildings. The study successfully delivered a design for a green hydrogen facility, which also makes use of existing landfill gas power to enable round-the-clock off-grid hydrogen production. The renewable hydrogen produced would be used to sustainably refuel the city’s refuse collection vehicles, including the option to re-use leachate water. The design features an east-west solar field, a fully containerised water treatment plant, and a modular hydrogen production and refuelling plant capable of producing 440 kilograms per day hydrogen production and 1,000 kg hydrogen storage.