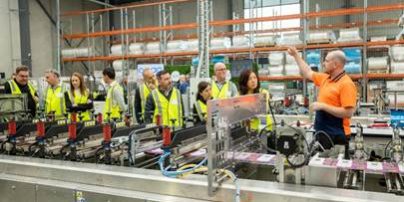 The Western Australian government has said it will investigate implementation of a Renewable Hydrogen Target. According to a statement made on Friday, the approach would set targets for retailers in the South West Interconnected System (WA’s main electricity grid) to procure a certain percentage of electricity fuelled by renewable hydrogen, creating a local market which would support emerging hydrogen projects and improve grid stability. It has claimed influences from “elements of the Commonwealth Government’s Renewable Energy Target” which has been in operation since 2001. “A Renewable Hydrogen Target may also prepare Western Australia to transition from natural gas electricity turbines to hydrogen turbines to stabilise our electricity grid,” said energy minister Bill Johnston.

ePac Flexible Packaging (ePac) has opened its first Australian manufacturing facility in Coburg, Melbourne with a tour by guests and local dignitaries (pictured). The $10 million facility incorporates an order-to-demand model, utilising a powerful HP Indigo 20000 printer and featuring two pouch production lines. The company said on-demand production and low minimums mean that packaging can be shipped in 10-15 business days. ePac said the new plant was a response to rising demand for locally manufactured flexible packaging, and the needs of small innovative businesses bringing product to market rapidly. The company plans a new line for compostable packaging by the end of the year.

Microbiology diagnostic device manufacturer LBT Innovations has sold one of its APAS Independence analysis units to the Albany Medical Centre in New York. The APAS Independence technology uses AI and an algorithm to detect bacterial colonies, hastening the time required to detect infections in samples from patients. The sale, which follows a six-week evaluation-to-buy trial at Albany’s laboratory, will include LBT’s recently developed urine analysis capability. The laboratory is part of a health system serving four hospitals, which generate seven million tests a year.

Dairy manufacturer Fonterra is continuing trials with Sea Forrest to test the seaweed Asparagopsis as a feed additive for its potential for reducing methane emissions from dairy herds. CSIRO has shown that Asparagopsis can cut emissions of the harmful gas by 80 per cent in laboratory conditions. However real-world emission reductions may vary. 900 dairy cows have been fed the seaweed as a small part of their diet over the past two years, in trials at an Australian farm. Results have been promising utilising the seaweed grown in the sea and in aquaculture ponds. Fonterra has a goal of net zero emissions by 2050.