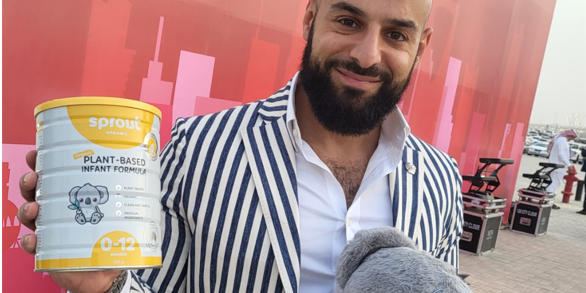 Vegan infant formula start up Sprout Organic is debuting its products at the Saudi Food Expo this week, the largest food, beverage and hospitality trade fair in Saudi Arabia. The plant-based dairy market in the Middle East and Africa is estimated to reach US$2.16 billion by 2026, driven by rising health and sustainability concerns of consumers. In Saudi Arabia, celebrities such as Prince Khaled bin Alwaleed bin Talal, the son of the Saudi billionaire Prince Al-Waleed bin Talal, are among the major proponents for plant-based diets. Celebrating the debut, Sprout Organic’s founder, Selasi Berdie said “We are now accelerating our global expansion, recruiting a great team, and bringing on an ecosystem of partners that will set the foundations for our international strategy.”

New research from Thales has found that ransomware, malware and phishing continue to plague Australian organisations, with nearly four in ten (38 per cent) of businesses been breached in the last year. The 2022 Thales Data Threat Report, conducted by 451 Research and surveying more than 2,700 IT decision-makers worldwide, reveals a fifth (22 per cent) of Australian organisations admit they have paid or would pay a ransom for their data. 51 per cent had a formal ransomware plan, and 37 per cent had increased their security budget in response to heightened concerns.

GMG and RIO Tinto to collaborate on batteries

Graphene Manufacturing Group has announced it has signed a non-binding agreement with Rio Tinto to collaborate on energy saving and storage solutions. The two companies intend to explore the use of energy saving products in Rio’s operations, explore working together to support GMG’s development of Graphene Aluminium-Ion (“G+Al”) batteries, and collaborate on mining and other industrial applications. GMG Managing Director Craig Nicol said, “The collaboration with Rio Tinto adds another key element in GMG’s leading partnerships to develop our G+Al Battery following recent agreements with Wood for scaling graphene production and Bosch for automated battery production.”

Dr. Jill Seubert has been named as technical advisor for HEO Robotics for advanced deep space projects. According to a statement from HEO, Seubert is helping to develop guidance, navigation and control systems “for efficient and robust mission operations, as well as provide general technical oversight.” Seubert’s background is at NASA’s Jet Propulsion Laboratory and Caltech, where she advanced new technology to improve deep space operations, and she has navigated numerous Mars landers and orbiters, including the most recent NASA Perseverance (Mars 2020) rover. According to HEO, Seubert “plays a critical role in HEO’s mission to image any object in the Solar System.”

Drone manufacturer and delivery services provider Swoop Aero has obtained approvals from Australia’s Civil Aviation Safety Authority to operate its latest drone logistics Remote Operations Centre (ROC). The approvals will enable Swoop Aero to monitor global operations and pilot up to five aircraft controlled by a single pilot anywhere in Australia where Swoop Aero have approved BVLOS drone delivery operations. In the coming months, this number will increase to 30 aircraft operational by a single pilot. The ROC will enable Swoop Aero to operate like an international airliner, centralising resources in the company’s Swoop Aero Campus to foster complete visibility and efficiency of network operations across the world. This will ensure that the global health supply is strengthened to bridge the gap in last-mile access, especially during outbreaks and public health emergencies. Swoop is involved in using its drones to deliver critical medical supplies, mainly in under-developed nations.