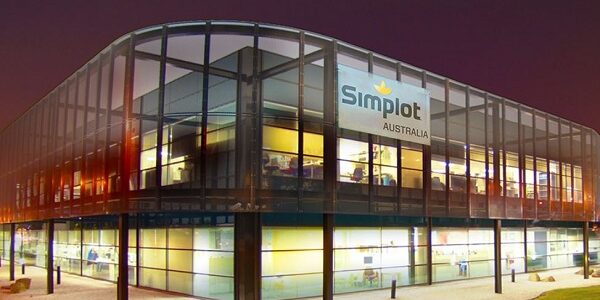 Simplot Australia has announced a $65 million upgrade to its Bathurst manufacturing facility and acquisiton of farming land in the Central West region of New South Wales valued at $40 million. Simplot Australia’s managing director Graham Dugdale said: “(We) will transform the Bathurst site into a frozen vegetable centre of excellence, enable increased production capacity, and ultimately help boost local and export volumes.” The investment will see the company’s Bathurst facilities upgraded, the extension of existing production areas, and the installation of new equipment, including new vegetable processing technologies. The works at the Bathurst operation are anticipated to be completed in 2024. Simplot Australia encompasses potato, vegetable, seafood, and sauce operations, selling under brands including Leggo’s, Birds Eye, Edgell, John West, and Chiko. Simplot operates six Australian manufacturing sites, employ about 2,000.

Architect turned startup founder Julia Kay, who recently told her story in her own words to @AuManufacturing readers, has been chosen as Young Victorian of the Year by the Victoria Day Council. Kay is the co-founder of Great Wrap, the compostable stretch wrap made from food waste. The Victoria Day Awards celebrate Victoria’s foundation following its split from New South Wales on July 1, 1851, and are seperate from the Australia Day awards. Kay co-founded Great Wrap with her husband Jody in 2020. The business is backed by Who Gives A Crap founder Simon Griffiths, and had an early boost from the Amazon Launchpad grants program. The Kays opened a solar-powered factory in Melbourne to produce Great Wrap, which breaks down into carbon and water in compost in less than 180 days. It’s produced from potato waste and they’re hoping to convert 300,000 tonnes of food waste annually into resin for Great Wrap by 2023. The business now has a second manufacturing facility on the Mornington Peninsula as well as the Tullamarine site.

Company fined $600,000 after death of young apprentice in his second week on the job

Melbourne manufacturer Marshall Lethlean Industries has been fined $600,000 over the death of a 20 year old apprentice who died after working in a tanker in only his second week on the job. According to ABC news, trainee welder Dillon Wu collapsed as he was cleaning the tanker after breathing in argon gas leaking into the tanker because a welder and a defective and unserviced wire feeder had been left there overnight. The Cranbourne West company pleaded guilty to a charge of failing to ensure that a workplace is safe. ABC news reported Judge Douglas Trapnell who said: “There was a total failure by the company to establish and maintain a system of work to eliminate or reduce the risk that eventuated. There were three separate failures which all contributed to the risk which eventuated. If any one of these safety procedures, mainly inspection and servicing of the welder, removal of the welder from the tank overnight, or turning off the argon gas flow at the end of the shift had been observed the incident would not have happened.”

Dubai’s Roads and Transport Authority (RTA) and Australian bus manufacturer BusTech Group will test a zero-emission electric bus to verify its operational feasibility in Dubai’s climate. The trial will also test technologies to enhance customer service experience and its ability to operate in a ‘smart city’ environment. The trial will monitor bus performance as well as driver and customer feedback. The RTA plans to increase the number of electric and hybrid vehicles in its fleets, improving energy performance. First-generation BusTech electric buses have been operating as a shuttle service in Dubai since 2017. The collaboration following a MoU signed between the Queensland Government’s Department of Transport and Main Roads and Dubai’s RTA.

A new collaboration between the City of Playford’s Northern Sound System (NSS) and BAE Systems Australia known as CnVRg has been launched to focus on skill development and engagement with science, technology, engineering and mathematics (STEM) learning. The collaboration initially involves Playford International College and Elizabeth Downs Primary School co-designing a Virtual Reality experience to inspire and engage up to 100 students. CnVRg aims to challenge a variety of problem-solving skills including non-verbal communication, pattern recognition, logical reasoning and innovation, while relying on a strong element of teamwork. BAE Systems Australia CEO Ben Hudson said he wants to continue to inspire and develop a diverse workforce into the future, while building the confidence and skills of young people. “Through CnVRg, we can help reinforce the importance of STEM learning through applied and interesting technology experiences.” BAE Systems will also support the initiative with site tours and work experience opportunities, so students gain a greater understanding of the careers opportunities available to them.

Infant formula manufacturer Bubs Australia – which has been tapped by US President Joe Biden to rush supplies of formula to the United States to help overcome local shortages – has announced an underwritten capital raise of $63.0 million. The raise is made up of a placement to institutions to raise approximately $32.4 million and an entitlement offer to existing shareholders to raise approximately $30.6 million. The raising will provide Bubs with additional balance sheet flexibility to support growth initiatives and execute on long term strategic goals. The proceeds will fund working capital to assist the immediate scale up of group activities given rapid market expansion, an inventory build, and USA operating expenses including marketing, administration, employment costs and consultancy fees. Capital will also go to expand canning capability to include the second high-speed canning line at the company’s Deloraine, Victoria facility to triple capacity. Bubs said it expected FY22 gross revenue to exceed $100 million and achieve greater than $2.4 million in underlying EBITDA.

Deakin University has appointed materials engineer Professor Nick Birbilis as the new Executive Dean of Science, Engineering and Built Environment, commencing in October 2022 and succeeding Dr David Halliwell in the role.
Birbilis is the current Interim Dean of the College of Engineering and Computer Science at the Australian National University, a position held since October 2021, following three years as Deputy Dean. Deakin Vice-Chancellor Professor Iain Martin said Birbilis would ensure the faculty he will head continues world-class research and inspiring Deakin students to reach their potential. “Professor Birbilis is a world-renowned materials engineer and is recognised for contributions in microstructure-corrosion relationships, including in the area of light alloys and additively manufactured alloys as well as 3D printing, with more than 20 associated patents,” said Martin. Birbilis is also a Fellow of the Electrochemical Society, the National Association of Corrosion Engineers, the International Society of Electrochemistry, and Engineers Australia.
Picture: Simplot Australia