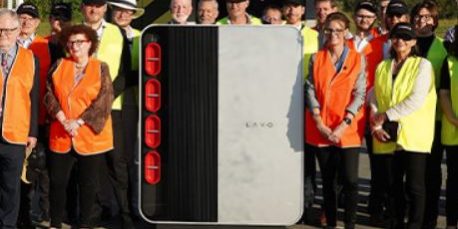 Ampcontrol and Lavo have demonstrated a number of innovations to a visiting delegation of European diplomats (pictured), including Lavo’s world’s first domestic hydrogen battery capable of storing enough electricity to power the average Australian home for two days. Visiting the Hunter region the 14 ambassadors showed the battery wehich is a collaborative partnership between the two companies. Ampcontrol CEO Rod Henderson said: “We have such highly skilled expertise, world-class educational facilities and ground-breaking research and development in the Hunter. We encourage global businesses to come here and work with us, invest in our cutting-edge technology and energy solutions, such as LAVO.” The delegation also viewed a stand-alone power system and an off-grid water security solution designed for regional and remote communities.

AI technology developer BrainChip has announced volume manufacturing has begun of its ultra-low power Akida AKD1000 meuromorphic processor chip designed for AI devices. Designed in association with Socionext, the engineering layout of the neural networking processors has been released to specialist manufacturer TSMC in Taiwan. Sydney’s BrainChip’s processors are aimed at bringing AI capability to edge computing devices, enabling personalisation of products. They can be used in areas such as smart homes, health, cities and transportation.

A new Defence and Maritime Innovation and Design Precinct will be established in Launceston, Tasmania. Supported by the Defence Science and Technology Group (DSTG), the precinct will build on the Australian Maritime College, part of the University of Tasmania and other satellite facilities in the state. It will enhance collaboration on areas such as maritime platforms and infrastructure, including naval architecture and sonar and autonomous systems.

Semiconductor memory technology company 4DS Memory has begun production of devices to test its next generation gigabyte storage systems for mobile and cloud devices. Testing has confirmed the company has been able to repeat the results obtained in terms of speed, endurance and retention of earlier test systems. 19 of 21 device wafers, produced at imec in Belgium, were functional, a first for the company. 4DS’s Fremont, California operations have been affected by the Covid-19 pandemic, with only a limited number of employees allowed in the facility at any one time.