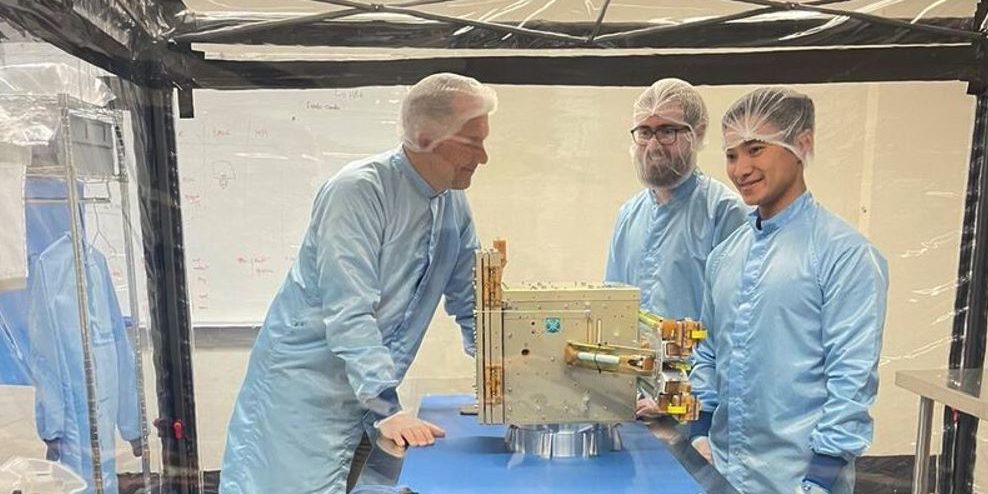 Smallsat manufacturer SkyKraft has released a picture (below) of its first spacecraft nearing completion and preparing to move to AITC, Mt Stromlo, for testing. SkyKraft, a spin-off from the University of New South Wales Canberra, plans a satellite constellation for space-based Air Traffic Management services with operations commencing in 2023. Meanwhile South Australia’s State Commission Assessment Panel has given Southern Launch the green light to build the infrastructure required to undertake three test launches at a Port Lincoln site before the end of the year. The company plans to build a permanent orbital facility, which would be one of only two such facilities in the Southern Hemisphere.

Testing for pharmaceutical developer Starpharma has confirmed virucidal activity of its Viraleze antiviral nasal spray against Alpha, Beta and Gamma variants of the SARS-CoV-2 coronavirus. Professor Philippe Gally of The Scripps Research Institute in the United States tested the spray’s active ingredient, SPL7013, with further variants remaining to be tested. Gally said the tests suggested a mechanism of action that was not impacted by mutations affecting the virus’ spike proteins. Potency was equivalent across all variant types. Viraleze is registered for sale in the UK, Europe and India.

On Friday Unions NSW launched the The McKell Institute’s ‘Build It Here’ report, analysing six NSW Government’s transport contracts. According to the report, if wider economic benefits were considered then four of the six would have been built in Australia, generating an estimated 4,192 direct and indirect jobs and over $484 million in payroll and income tax collections. Mistakes could have been avoided by local manufacture as well, said Unions NSW Secretary Mark Morey: “intercity trains didn’t fit on tracks in the Blue Mountains, Sydney’s new ferries don’t fit under bridges along the Parramatta River, and require passengers to clear the top deck on every trip, and the cost of the new Sydney Metro has blown out by more than $4 billion.”

Infant formula and goat milk company Bubs Australia has entered the US market with its products to be stocked by Walmart.com and Amazon from September. The company told investors warehousing and distribution were in place. Initial products to be sold include its first bilingual English and Hispanic labelled Aussie Bubs brand goat milk toddler formula and grass fed nutritional milk toddler formula. It also claims it will be selling the only Australian goat milk formula product on the US market. The products carry QR authentication trust codes ensuring product authenticity. The company has established a US subsidiary, Aussie Bubs Inc based in California.

Perth shipbuilder has delivered its 11th Guardian class patrol boat which has been gifted by the federal government to the Republic of Kiribati. The RKS Teanoai 2 is a 39.5 metre steel monohull design. Built as part of the government’s Pacific Maritime Security Program, the vessel replaces the original Pacific class vessel delivered in 1994. Austal will deliver all 21 Guardian vessels on time by the end of 2023.

Bio-technology developer Cellmid achieved wholesale revenues of $1.4 million in a single 24-hour shopping event on Japanese TV shopping channel QVC Japan. The event featured the company’s Jo-Ju brand hair loss products with sale equalling 80,595 bottles, a 36 per cent rise on sales during an event in 2020. Cellmid also sells its hair loss and anti-ageing hair care products on television in the US, the UK and Openshop Australia. The company has been switching focus from bricks and mortar stores to e-commerce and TV shopping channel distribution.