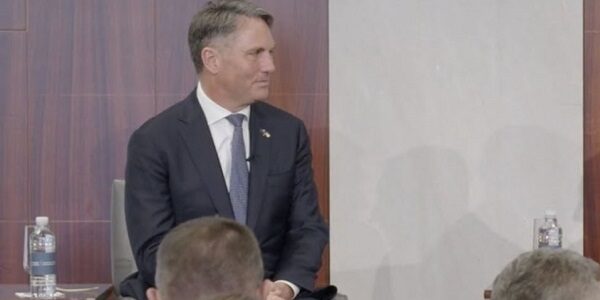 Deputy Prime Minister and defence minister Richard Marles has pledged to strengthen Australia’s defence industries and integrate industry more closely with supply chains of our partners in the Aukus pact, the United States and the United Kingdom.

Speaking at Centre for Strategic & International Studies in Washington, Marles said a key objective of the Labor government was to improve Australia’s ability to integrate its technology and industrial bases with the US and UK in ways that make a difference.

Marles said: “Australia’s inclusion in the US National Technology and Industrial Base was a vital first step but implementing it will require change.

“During my engagements this week, I will be proposing specific measures that both sides could adopt to streamline processes and overcome barriers to procurement, investment, information and data sharing systems, and export requirements.”

In the past Australia has mainly been an importer of US equipment and technologies, however Australia industry has been increasingly contributing directly to US security, with Canberra aiming to boost that further.

BAE Systems Australia already provides Nulka decoy rockets that protect US capital ships from missile attack, Austal builds aluminium and steel ships for the US Navy in Alabama, and numerous companies have established in the US such as Electro Optic Systems which manufactures remote weapons stations for the US army.

Marles offered praise to the former coalition government when he said that two years ago, ‘to the credit of the former government’, they undertook a defence strategic update.

He said the work underway under Aukus, and a force posture review he has previously announced would build on this to ‘help determine how best to equip and structure the ADF and how to enable it to integrate and operate more closely with the US and other key partners’.

Marles said Australia would make the investment necessary to increase the range and lethality of the Australian Defence Force so that it is able to hold back a potential adversary.

“And this will include capabilities such as long-range strike weapons, cyber capabilities, and area-denial systems tailored to a broader range of threats, including preventing coercive or gray-zone activities from escalating into conventional conflict.

“We will invest in the logistics, sustainment, and depth required for high-intensity and high-end warfighting, including guided munitions. And this will, in turn, require deeper engagement with industry to accelerate capability development and strengthen our supply chains.”

Marles said Australia’s guided weapons and explosive ordnance enterprise was an example of a project that would not only build Australia’s guided-weapons stores, but would establish a trusted second source of critical munitions supply to the United States.

“In tandem with other initiatives and other partners, such as our Loyal Wingman program, hypersonics cooperation, and through AUKUS, we have the ability to build a technological coalition that can maintain our competitive edge.”

Marles said supply chain integration would require the alliance to work across both government and industry.

“Our ultimate goal is to supplement and strengthen U.S. industry and supply chains, not compete with them.”

Marles said his first priority was Aukus and ‘for a three-ocean nation, the heart of deterrence is undersea capability’.

“What is the actual submarine – nuclear-powered submarine that we’ll run with? And how do we get from where we’re at now in 2022 to that moment? And again, we’re looking for an answer to that in the first part of next year.”