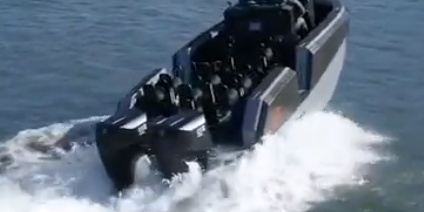 A collaboration of boat builders, niche manufacturers and experienced former defence personnel has launched the first of two Whiskey Project tactical boats the makers are offering to the armed forces.

The first, the Alpha85 (pictured) broke cover late in 2019 and has been tested by interested parties and the media.

Built by sailing boat builder Munster Boats for a start up led by former defence staff Darren Schuback and Ryan Carmichael, the boat is 8.5 metres long at the water line and carries 12 personnel.

Defence Technology Review Magazine posted on social media that the boat sustained a top speed of 38.9 knots during a demonstration drive in the Pittwater area of Sydney.

The hull is an advanced tri-hull which gives increased stability and less ‘bash’ than competing designs.

The 8.5 metre boat is to be followed by an 11 metre variant.