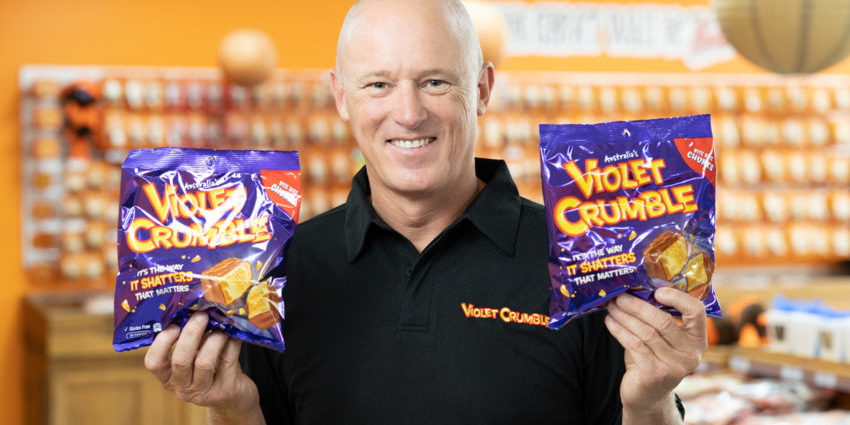 Adelaide confectioner Robern Menz has ditched the original name that has served the family business for almost a century in favour of a rebrand.

The Glynde manufacturer of FruChocs, Violet Crumble and Crown Mints will now be known as Menz Confectionery and has adopted the tagline “Making life sweeter”.

Menz Confectionery CEO Phil Sims (pictured) said the new name reflects the company’s growth over recent years which includes the addition of the Violet Crumble and Pollywaffle brands, increased production, more staff to cater for demand and export markets that include the US and Asia, with more growth on the horizon.

The company bought the Violet Crumble brand from Nestle in 2017 and followed it with the purchase of  Pollywaffle in 2019.

It continued manufacturing Violet Crumble uninterrupted but is still working on a new production line to re-launch the Pollywaffle chocolate bar – not seen on shelves since 2009 – with the product most likely be brought back next year.

“Over recent years, we’ve been humbled to see the business grow and with this growth, has come a need to reflect on who we are as a business today and how we want to position ourselves moving forward,” Sims said.

Sims and his brother Richard are the fourth generation to run the Robern business started by their great grandfather Walter Sims.

Walter started a dried fruit business in the Riverland in 1926 and named it Robern in honour of a family friend, Robert Burnley, who had died aged 14.

The Menz part of the story dates back to 1850 when Prussian immigrants Johan and Magdelena Menz began a baking business in Wakefield Street in Adelaide.

They developed the Yo-Yo and Bush Biscuit, which later achieved national distribution through Arnott’s, and started producing confectionary including Crown Mints in 1892.

The Menz family produced its first FruChoc – a chocolate-covered fruit ball – in 1948.

The company was sold to major biscuit manufacturer Arnott’s in the 1960s and the confectionary part of Menz was sold to Robern in 1992 when Campbells Soup bought the Arnott’s biscuit business.

Sims has been CEO since 2001 and joined the family business in 1992 when Robern bought Menz.

“We’re a brand with a rich history in Australia – we’ve been around for 150 years, are the custodians of over 100 products and to ensure we’re still thriving in another 150 years,” he said.

“Our ultimate mission is to make life sweet for Australians and beyond and this brand shake-up is going to drive that goal for us into the future.

“We know that a great brand appeals to both the head and the heart, and here at Menz Confectionery, we are about evoking memories, bringing people together and making life sweet.”

Over the next two years, customers will see the new tagline and shortened name ‘Menz’ on all packaging across the brand portfolio.

Robern Menz moved from Stepney to its current location on Glynburn Road, Glynde – the former Gibbs Pies factory – in 1995. It has about 160 staff.

The rebrand comes at a time when the company is ramping up two major capital expenditure projects: the doubling of its honeycomb line and the re-introduction of the Polly Waffle chocolate bar.

The new honeycomb line will increase the company’s Violet Crumble capacity following a surge in demand during the coronavirus pandemic and increased exports to the United States and Asia.

The company began shipping Violet Crumbles to the US in 2018 and opened an office in California last year.

Exports to the Philippines and Singapore have also ramped up.

The new brand identity, developed by Adelaide based agency Showpony, took 12 months to develop. It includes a logo refresh and identifies the company’s core values, purpose and narrative.

“We wanted to build a brand that speaks to the customer but also to the brand’s rich history and bright future,” he said.