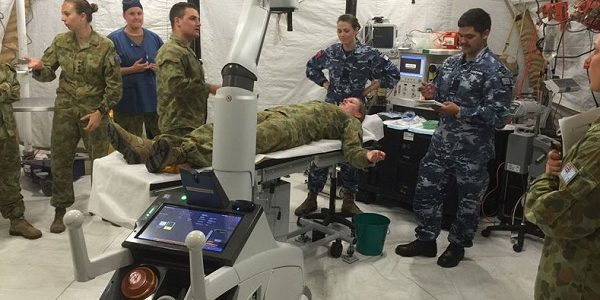 Innovative X-Ray machine manufacturer Micro-X has moved closer to launching the militarised version of its Nano machine following the completion of compliance testing.

The Adelaide company said today it had successfully completed the electrical and mechanical safety test programme for its new Rover X-Ray machine (pictured), the final requirement before applying for US Food and Drug Administration approval to market the device.

the company, which pioneered the use of carbon fibre nanotubes as an X-Ray emitter, enabling smaller, lighter and less power-hungry machines, is now preparing its FDA dossier for submission within weeks.

Subject to approval by the FDA the Rover will be available for sale, including to the US Army Material Agency which has expressed ‘strong interest’ in trailing the Rover.

Regulatory filings will follow in other jurisdictions to allow possible sale to UK and Australian defence forces which are also prospective customers.

Micro-X managing director Peter Rowland said the Rover would be the first product the company brings to market under its own name and brand – the Nano is branded and sold globally by distributor Carestream.

Rowland said: “The Rover will also be the first mobile X-Ray unit which has been purpose-designed for deployed military operations and which incorporates many features specifically requested by military users.

“We are focusing our efforts on being able to secure a first sales of the Rover this year.”

Meanwhile the company continues to develop a new high-power generator for the Rover, a project that will take up to 12 months.