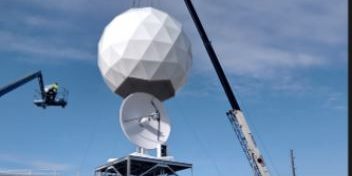 Technology group Microsoft has wasted no time fleshing out its entry into the Australian space sector, promising to build ‘a couple’ of satellite ground stations in Australia as part of a global satellite data network.

Last week Microsoft signed a statement of strategic intent with the Australian Space Agency and set up an office of its Azure Space team at the Lot Fourteen technology precinct in Adelaide.

He said the ground stations will allow for much faster transmission times than if that data had to be shipped over the internet for processing at remote data centres.

Microsoft has set up similar satellite stations (pictured) elsewhere, with a global network needed to allow for 24 hour contact with Microsoft or third-party satellites as the Earth rotates and satellites move in space.

Microsoft has inked a number of agreements in the short timed it has been active in the local space sector.

The company and Nokia have partnered with the state government to innovate with space technology, Artificial Intelligence and 5G telecommunications to bring a new class of digital solutions to industry.

Microsoft is also collaborating with the Lot 14 based Australian Institute for Machine Learning (AIML).

She said with Nokia it would explore how space and 5G innovation can be adopted for the benefit of industry in South Australia and nationally.

McDonald said: “We are delighted about this agreement with the South Australian Government and the opportunity to work with Nokia as we bring together interdisciplinary experts to develop, test and deploy new technologies and strategies that respond to some of the biggest challenges facing organisations today.”