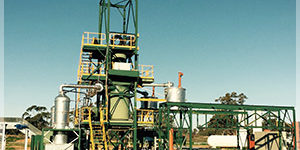 Regional recycling technology developer Green Distillation Technologies is continuing its run of success with increasing interest in its tyre recycling systems pioneered at a plant at Warren in New South Wales.

The company announced that an agreement with a United States group to build 10 tyre recycling plants using its technology had been increased to encompass 15 plants to cost around $150 million.

GDT COO Trevor Bayley said: “Our policy is for the joint venture company to construct the plant at cost as we want to maintain our interest in the plant and provide on-going input to future operations and also be able to implement new technology improvements as our research and development discovers new ways of improving our performance.

“This is in contrast to other tyre recycling plant providers, who can supply an off the shelf plant for say $US35-40 million, but incorporate their profit in the cost of the plant and then walk away.”

“By contrast, we obtain high value oil, carbon and steel, which is in demand by world markets at international market prices.”

A typical GDT plant is capable of processing 19,000 tonnes of tyres a year.

The company has a MOU with a South African group for the construction of five plants there.

In Australia the company’s Warren plant is being expanded.

“We have all the Government approvals in place for another in Toowoomba, as well as plans for other facilities in Gladstone, Wagga, Geelong, Elizabeth and Collie, Western Australia.