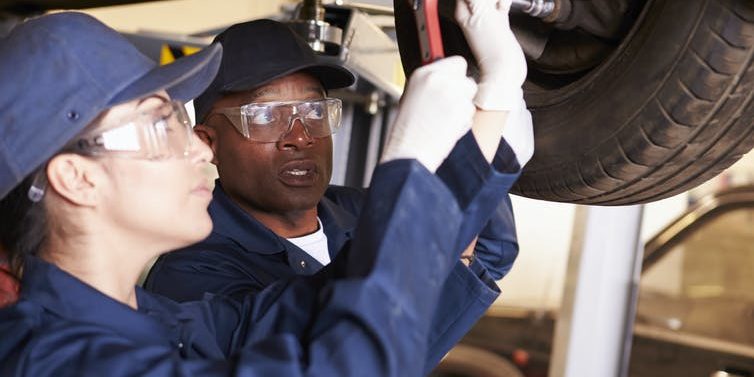 More than 80% of young adults who did a short spell of post-school education or training (such as a certificate or diploma), or went directly into work, were in full-time work by the time they were 25. This was compared to 64% of those who studied at university first.

This is based on the 2006 cohort of the Longitudinal Surveys of Australian Youth (LSAY). The LSAY follows cohorts of young people from the age of 15 as they transition from school to further study and work, until they are 25.

School-to-work pathways is one of 14 reports summarised recently in the book 25 years of LSAY: research from the Longitudinal Surveys of Australian Youth.

The report shows most of the cohort of 3,186 young people – who completed every survey from 2007-2016 – followed a simple university to work pathway or early entry into work after school. The latter generally includes some vocational education and training (VET).

But the remaining 17% had varied and complex transitions including frequent switching between higher education and VET, episodes of part-time work and repeatedly disengaging from the labour market.

Another report examined more closely the group of people aged 15-24 who weren’t in any work, education or training for six months or more.

It found those who were persistently not employed, and not in any education or training (including school) as teenagers (aged 15-19) were three to five times more likely to be so at 20-24 than those who were studying or employed during their teenage years. These teenagers were also more likely to have poorer education outcomes when they were 20-24.

VET and university before work

The first report identifies five different pathways young people took on the way from school to further study or work. These were:

Of the study sample, 60% chose a university pathway. But the early entry to full-time work pathway was the quickest route to employment. Nearly every young adult (97%) who took this pathway (which usually involves some VET) were employed full or part-time by the age of 25.

Out of young people who took the first, higher education to work pathway, 92% were employed in full or part time work by 25.

We looked at outcomes at the age of 25, which means many young people were still catching up in terms of full-time employment. This includes those who took a university pathway and studied full-time for longer.

About 23% of the study sample had left school early and were in full-time work shortly after – most of them were doing a vocational education and training course. About 69% of young people in this group had VET qualifications as their highest qualification by 25.

About half of this group did apprenticeships and traineeships as an express pathway to work.

The top three occupation groups for those who took this pathway and were employed by 25 were: technicians and trades workers, clerical and administrative workers, and community and personal service workers including child- aged- and disability-carers.

The top three occupation groups for those employed by 25 who first went to university were: professionals, clerical and administrative workers and community and personal service workers.

Most (70%) young people in the mixed and repeatedly disengaged pathway went through 11 or more transitions. These included a frequent change in employment status, an unstable employment record and long periods of unemployment.

Young people who were less academically inclined (having lower maths and reading scores) had a higher likelihood of following the early entry to full-time work pathway.

Young people from lower socio-economic backgrounds were also less likely to engage in the university pathway, and more likely to follow the early entry to full-time work pathway.

What about those who aren’t in work or study?

Not all pathways led to employment by age 25.

About 5% of young people were in the mixed and repeatedly disengaged pathway. They were mostly unemployed after school and experienced long or multiple periods of not being in any education, employment or training.

The second report looked specifically at young people who were not working or studying. It showed the main predictors for being persistently out of work and not in any education or training were: leaving school early, having a child (particularly for those under the age of 20) and coming from a disadvantaged background.

Conventional wisdom holds going to university after school leads to better outcomes in terms of a full-time job with a good salary. But this does not hold true for all young people.

For some, doing an apprenticeship or going into full-time work straight after school may be a more suitable option than finishing school.

Vocational education and training can also be a viable alternative among young people vulnerable to being disengaged, such as early school leavers who cannot find work. For others, such as those who are not in the labour force due to parenting responsibilities, a variety of social supports may be required.

The analysis here presents a useful categorisation of transitions but, due to constraints with the data, the proportions can’t be applied generally to the youth population.

Nevertheless, the initial LSAY sample is representative of the Australian population and remains useful in providing insights on youth transition pathways.

New market for locally-made products emerges out of pandemic
July 16, 2020

Advanced composites manufacturer Quickstep Holdings Limited has continued to grow sales during the Covid-19 pandemic according to its results released today for the June quarter.
https://www.aumanufacturing.com.au/quickstep-grows-composites-sales-despite-covid

The new Buy Aussie Now online marketplace has received over 2,000 registrations so far, ahead of an official launch next month.
https://www.aumanufacturing.com.au/new-market-for-locally-made-products-emerges-out-of-pandemic