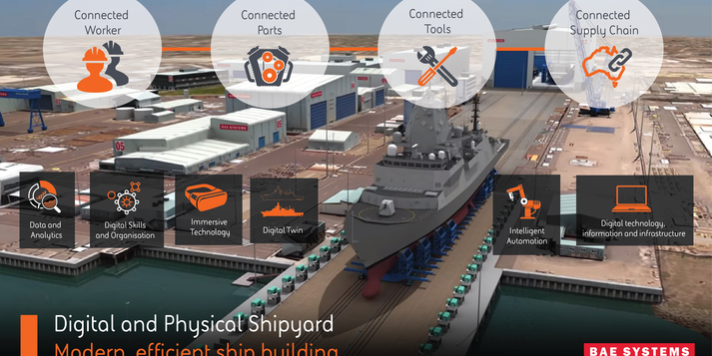 With the federal government letting $90 billion in contracts for patrol boats, frigates and submarines, yards in Perth and Adelaide are increasingly digitally enabled.

The BAE Systems yard being enlarged at Osborne in South Australasia is to be fully digitally enabled from day one.

The new Diploma of Digital Technology is a partnership between the prime contractor for the Hunter Class Frigate Program, BAE subsidiary ASC Shipbuilding, and Adelaide’s Flinders University.

The course is funded by the South Australian and Commonwealth governments.

The Diploma of Digital Technology will educate participants on digital technologies, and connected workers and information systems being used to build the $35 billion Hunter Class Frigate Programme.

“As we build the world’s most advanced digital shipyards in South Australia, the government is focused on fostering a world class Australian workforce that can leverage digital information and intelligence systems to facilitate greater innovation.”

More than 60 shipbuilding workers from the Hobart Class Air Warfare Destroyer Programme will take part in the course.

“The broader skills that participants will develop will also support continuous naval shipbuilding in Australia, and will be a boost to workers in terms of their future employability.”

Coursework will take place online and at Flinders University at the Tonsley Innovation District.