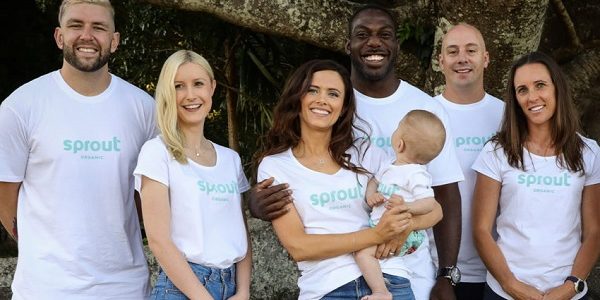 It was with the aim to disrupt the infant formula industry that Gold Coast company Sprout Organic launched the world’s first organic plant-based infant formula 12 months ago.

Within a year, the company has been awarded the World Food Innovation Award for ‘Best Children’s Product’ and positioned itself at the forefront of the blooming plant-based movement.

Sprout Founder and former National Rugby League prop Selasi Berdie, who started his career with the Gold Coast Titans before turning to business, said he and his wife Jen spotted a gap in the organic, plant-based infant formula market outside of soy products.

Using only organic ingredients and adhering to Australia’s globally recognised infant nutrition standards, the formula they developed over seven years was selected globally out 272 entries from 22 countries across 25 categories to claim the world food innovation award.

“I think you would have to be living under a rock to not realise the plant-based movement is only growing and gaining more and more momentum,” Berdie said.

“Whether it’s due to sustainability, health or ethical beliefs, people are realising that eating more plants not only benefits them but also the environment.”

More than an alternative to burgers and other meat products, plant-based proteins and products are being used widely in the health-conscious food and supplements markets, aimed at offering more sustainable food production that is good for the planet.

The move into the highly regulated infant formula was a significant step not only for Sprout, but also for the industry.

“The growth and technical development seen in the last five years has been remarkable and I can only imagine what we will see in the next five years, especially in the convenience sector and alternative (plant-based) meat category,” Berdie said.

According to the most recent Food Frontier Report more than one in three Australian consumers, are actively trying to reduce their meat consumption.

The CSIRO, in its report ‘Protein: A roadmap for unlocking technology-led growth opportunities for Australia’, also identified a $13 billion market opportunity for Australia to grow and diversify its high-quality protein products.

This includes the sudden shooting in plant-based proteins, with exports currently valued at $3 million.