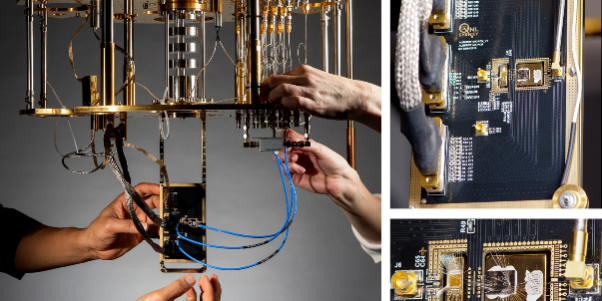 Technology giant Microsoft has joined rival Google in announcing important advances in quantum computing, the next stage in smaller and ever more capable computers.

Yesterday Microsoft chief executive officer Satya Nadella announced the technology company had developed a “full-stack, open cloud ecosystem” to bring the benefits of quantum computing to developers around the world.

He said that it had made breakthroughs in qubit control technology at its Quantum Laboratory at the University of Sydney.

In a quantum computer, data is stored at the sub-atomic level with a qubit a quantum bit of information.

Nadella said in a statement these breakthroughs “allow us to scale beyond the physical limitations of current systems.

“We now have the ability to control up to 50,000 qubits through simply three wires, a cryogenic CMOS design, and a 1cm2 chip computing near absolute zero temperatures.”

Just over a week ago in a paper published in the journal, Nature, scientists at Google reported they had achieved quantum supremacy, a long-awaited milestone in quantum computing.

The announcement is a world first by a team led by John Martinis, an experimental physicist at the University of California, Santa Barbara, and Google in Mountain View, California.

Martinis said that its quantum computer carried out a specific calculation that is beyond the practical capabilities of regular, ‘classical’ machines.

The same calculation would take even the best classical supercomputer 10,000 years to complete, Google estimates.

Behind the Microsoft announcement is an engineering development at the Microsoft Quantum Lab Sydney, led by Scientific Director and Professor at the University of Sydney, David Reilly.

The device developed at Sydney is ‘hardware agnostic’, meaning it is built to work with any type of quantum computing hardware.

Professor Reilly said: “It is fair to say the chip we have developed is one of the most sophisticated micro-devices ever made.

“It has miniaturised the complex support networks that are making early-stage quantum computers possible.

“This means the next step, which is to scale-up to devices that actually solve real-world problems, enters the realm of possibility.”

Professor Reilly will publish further details in the coming months.