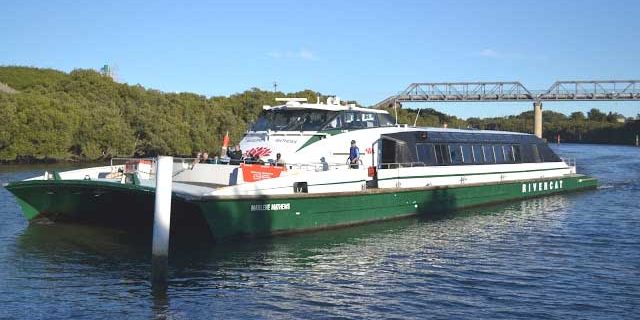 The New South Wales government’s obsession with buying overseas has reached new lows with news that it is importing ferries that won’t fit under its Parramatta River bridges with passengers sitting on the top deck.

The fiasco mirrors its buy from overseas of intercity trains that wouldn’t fit through the tunnels in the Blue Mountains, necessitating the widening of tunnels and re-contouring of station platforms.

The NSW government is buying trams, intercity, double decker suburban and metro train sets from overseas – crippling any chance of a viable local industry in the process.

Today smh.com.au reported the ten new River Class ferries, which have been built in Indonesia and shipped to Australia, were too tall for River bridges if passengers were on the top deck.

This necessitated “operational procedures” to remove people from the top deck before they reach the low lying bridges.

A Transport for NSW spokeswoman said: “While customers are able to enjoy the upper deck during their commute, they will need to move to the lower deck when passing the bridge.”

Opposition spokesman Chris Minns said the bridge problem was an example of problems borne out of governments outsourcing manufacturing overseas.

What short sightedness buying all this equipment overseas in the first place, with this latest news falling into the monumental stupidity category.

Needless to say there are companies that can build trains and ferries in Australia – they have been doing it for decades if not a century.

Really, a minister, or let’s make that an arrogant and incompetent government, should fall over this fiasco.

Picture: Sydney’s RiverCat ferries were built in Queensland and fit under Sydney’s bridges