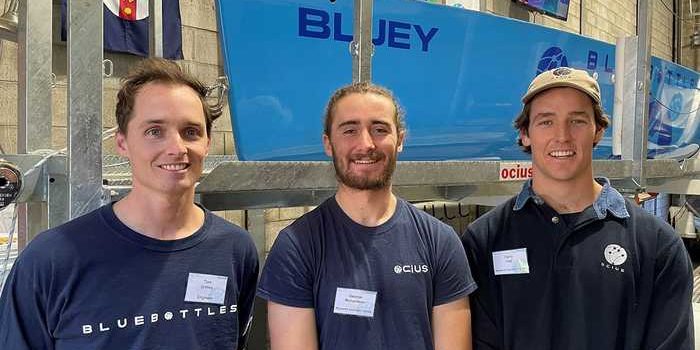 Uncrewed surface vessel (USV) manufacturer Ocius has christened the last of five USV’s it is building under a $3 million Defence innovation contract.

The Bluey, Brizo and Beacon were christened at the company’s factory on the UNSW Randwick Campus.

In June the 18 foot Bluebottle prototype successfully identified and navigated around surface vessels such as speed boats in trials off the NSW coast, and maintained speed in various sea conditions.

Bluebottle is normally powered by the waves which operate an underwater ‘flipper’, though the boat is equipped with a back up propeller.

When deployed, the patented hard solar sail harnesses both solar and wind energy. When not desired it automatically folds into the deck of the Bluebottle.

The USVs can be equipped for anti-submarine warfare (ASW) and surveillance missions.