Offshore wind is playing an important role in Europe’s shift to renewables.

Australia’s excellent offshore resources now look like they are going to contribute to our own energy transition. Last week, the Victorian government announced ambitious targets for offshore wind capacity of 2 gigawatts (GW) by 2032, 4GW by 2035, and 9GW by 2040.

If this is all built, it will produce somewhere in the region of 40 terawatt hours (TWh) of power, close to all electricity used via the NEM in Australia’s second most populous state.

Offshore wind offers another excellent renewable option as we decarbonise electricity. But more needs to be done to turn these plans into enormous turbines off our coast. We need to streamline regulations, introduce more targets, fund research and begin building a supply chain. 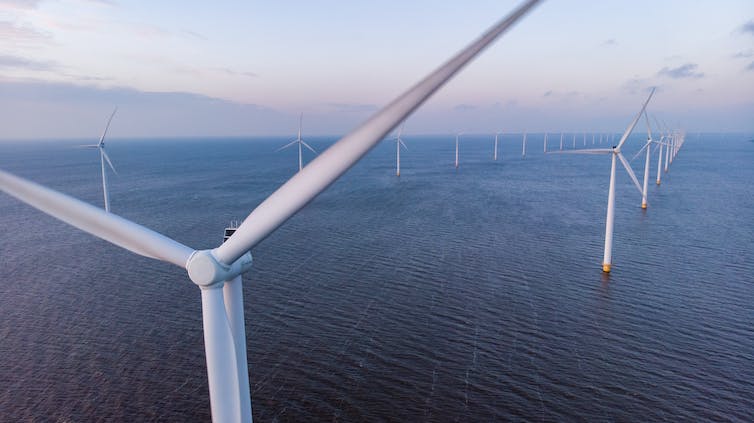 Offshore wind farms have become an important source of electricity in Europe.
Shutterstock

Where should offshore wind be built? Key locations are off the Gippsland coast, as well as the coasts of the Hunter and Illawarra regions and off Tasmania’s north-west, according to the draft 2022 Integrated System Plan issued by Australia’s energy market operator. At least 12 projects are in the early stages of development.

So what do we need to make this a reality? In our recent working paper, we asked experts from industry, government and the research community which policies they believe are needed to get offshore wind up and running. We surveyed experts across the region, from Northeast Asia, South Asia and Southeast Asia, as well as Australia.

We found the experts shared strong support for the use of policy targets. Why? Because policy targets help provide the certainty of an ongoing pipeline for windfarm developers. Other state governments could follow Victoria and use targets to kickstart the offshore wind industry.

Targets alone will not be enough. Our experts singled out streamlined regulation as important. Some European nations have moved to coordinate offshore wind siting, consultation, and project development processes. Japan is now looking to adopt this approach. 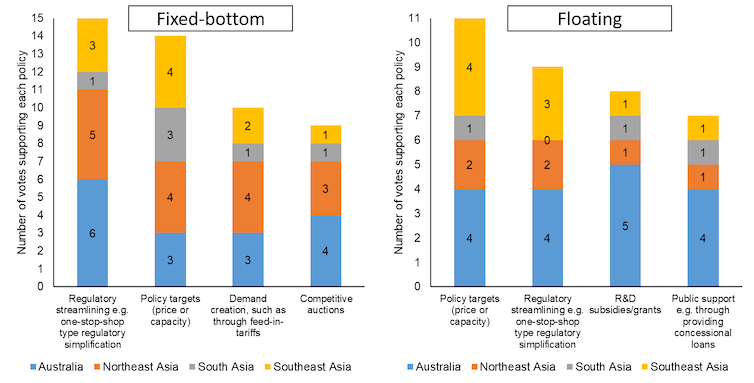 Expert support for policies to accelerate offshore wind development, separated by turbines mounted on the seabed and tethered floating turbines.

Most of the world’s offshore turbines sit on fixed foundations in waters less than 60 metres deep.

Some of Australia’s best offshore wind resources are located in deeper water. That means we’ll need to use floating turbines, which sit on surface platforms tethered by cable to the seafloor.

This technology isn’t as developed as fixed foundation turbines. As this technology matures and becomes cheaper, it will open up more areas. 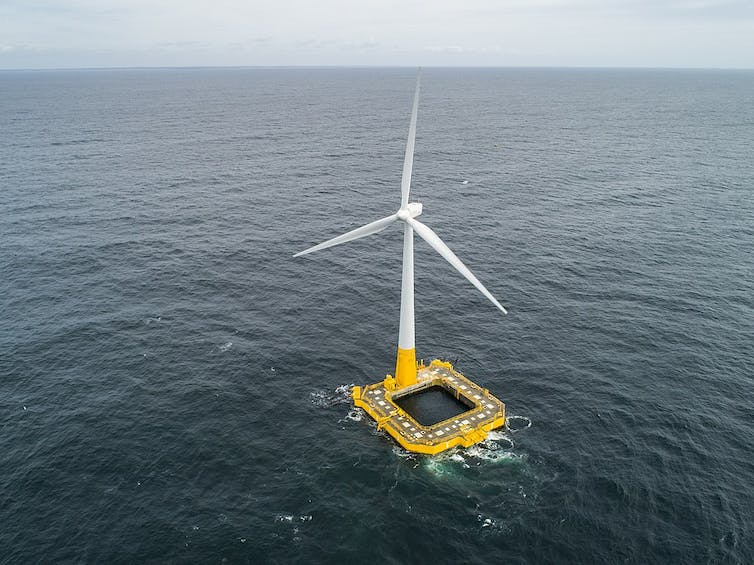 Floating wind turbines are under development.
Wikimedia, CC BY

How can we speed this up? According to the experts we surveyed, we can make costs fall faster through government-backed research and development, as well as supporting commercialisation of newer technologies and processes.

We are only at the beginning of offshore wind

It’s unusual to see federal and state governments seeing eye to eye on renewables.
But that’s what we’re starting to see with offshore wind. Last year’s federal legislation has had positive spin-off effects clearly seen in Victoria’s new vision for the sector.

Victoria’s government believes its mooted offshore wind pipeline will be a major source of new jobs, throughout the project development, construction, and operations phases.

Some of these jobs will be in coal regions such as in the Latrobe Valley, which are beginning to transition away from coal mines and coal power stations. 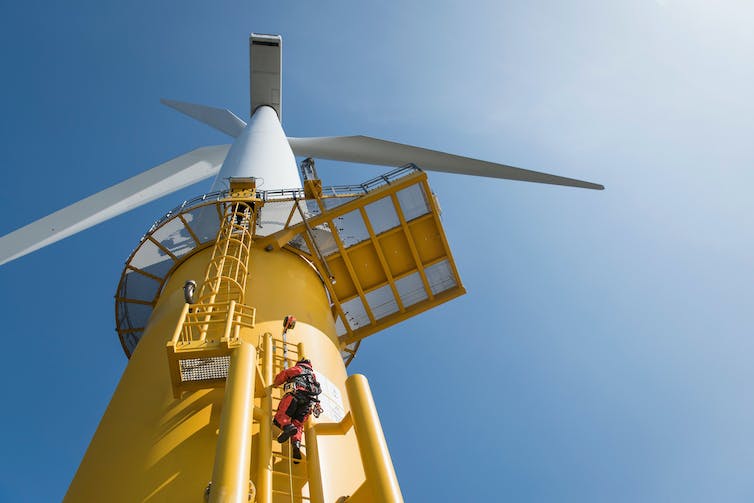 As you might expect, planning, building and running offshore wind farms is complex, requiring coordinating with other users of ocean resources, measuring wind resources, assessing the potential environmental impact, developing necessary port infrastructure, and securing a connection to the electricity grid.

This means that while federal legislation and state government announcements are vital first steps, they are just the beginning of building the policy framework and supply chains to support a substantial offshore wind industry in Australia.

Is it worth it? Absolutely. Europe’s thriving offshore wind market shows us this electricity source is more than capable of competing against other electricity generation sources without subsidies. Offshore wind could also provide renewable electricity to produce hydrogen.

What are the next steps?

Australia has offshore wind projects already in early development, with the Star of the South off Gippsland the most advanced. If this goes ahead, this 2.2GW project could supply up to 20% of Victoria’s electricity needs.

In Western Australia, a 3GW offshore wind farm has just been proposed. The project’s backers suggest this would be enough to enough to generate up to 11 TWh of power annually, offsetting around six million tonnes of CO2 emissions each year.

Costs are expected to fall and keep falling, if global deployment of offshore wind increases in line with net zero emissions targets, according to CSIRO projections. 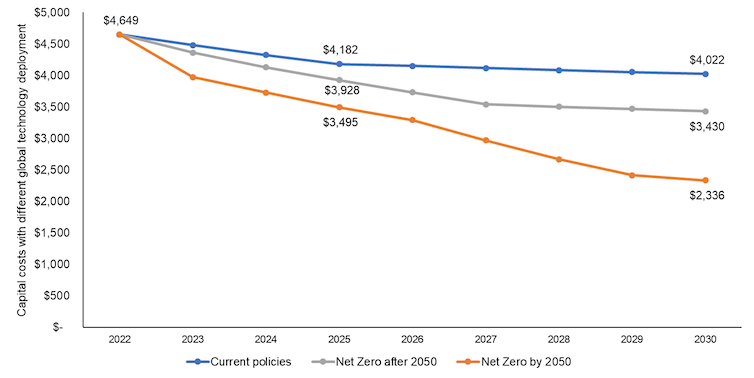 It is excellent news that offshore wind has begun to gather real momentum. Now is the time to consider measures such as regulatory streamlining, more policy targets to de-risk investments, and investments in research and development.

If we get these in place, offshore wind could become an important part of the energy transition in Australia – and help Australian companies compete internationally for a share of this ballooning new market.

Main picture: Friends of the Earth