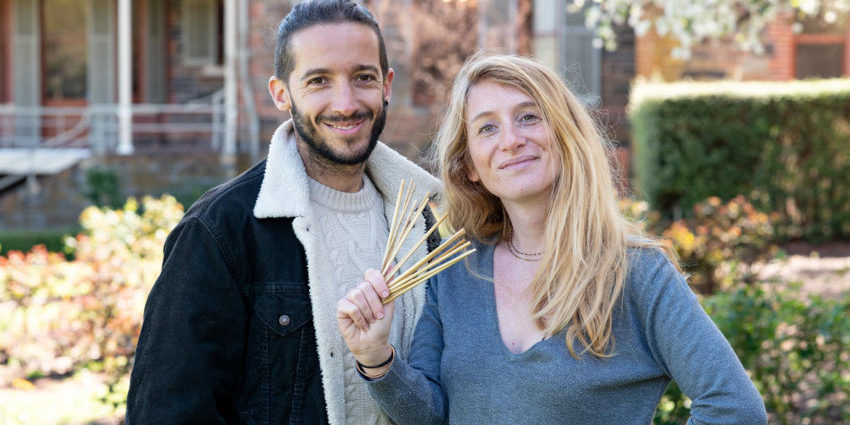 Drinking straws made from locally grown organic rye are being developed ahead of a proposed single use plastic ban in South Australia.

Startup Mister RYE formed in the South Australian capital in April and is part of the University of Adelaide’s new ThincLab Waite incubator program.

Founders Marion Vigot and Alexis Branlard have formed a partnership with an organic rye grower 200km east of Adelaide and are aiming to have their first commercial straws available in January.

In the meantime they are running a series of tests on rye grown at the Waite Research Precinct in Adelaide, which has the largest concentration of research expertise in the Southern Hemisphere in plant, food and agricultural sciences.

Vigot said although there were a lot of plastic alternative straws on the market such as bamboo and metal, no other producer was working with local farmers in such a low impact way.

“They are just basically importing alternatives that still have a high carbon footprint because of high emission manufacturing, plastic packaging and the huge distances they are being shipped to Australia,” she said.

“The goal of our project is to be a zero waste business and we know we will get some waste from the processing of the straws.

“We are currently studying the biomass of the stems in order to see what other products we could create after the straw so we can become a zero waste business and offer other alternatives to plastic products.” South Australia produces up to 70 per cent of Australia’s cereal rye, a very strong and hardy plant with tough stalks that can withstand hot and cold liquids.

When cereal rye is harvested, usually in November or December, the grain heads are collected, leaving the stalks to be cut into chaff or left in the field.

Under the Mister RYE plan, a second machine will then be used to harvest the stems, which will be turned into drinking straws in Adelaide.

“The rye stalks are already hollow, they just have nodes between them,” Vigot said.

“Once we get the crop in we cut them between the nodes and we sterilise them using natural processes.

“The use of organic rye is mostly a safety measure because we know that with organic products the plants will not have received any chemicals or pesticides when they are grown so there is no danger to the end user.”

Branlard and Vigot are French nationals who spent a year travelling around Australia before qualifying for a three-year Supporting Innovation in South Australia visa in March.

Vigot said the development of Mister RYE was only in its infant stages when the South Australian government in July announced moves to ban a range of single use plastic products including plastic straws, cutlery and stirrers.

“It was actually great timing and for us it was just a way to confirm that we were in the right market at the right time,” she said.

“Hopefully other states will follow South Australia’s lead and that will be great news as well.”

Mister RYE will next month launch a crowdfunding campaign to fund the initial production of one million straws. The first straws will be distributed to early supporters at the end of this year with a full commercial launch expected in early 2020.

“Once we finalise the crowdfunding campaign we are aiming to distribute them everywhere you currently find plastic straws – cafes, restaurants, bars, retail and direct to consumer online as well,” Vigot said.

“We want to work with people who want to help the environment in the first instance but we are also targeting businesses that currently rely on plastic straws and are going to need to find alternatives.

“We want to be there to offer Mister RYE as the best solution.”