South Australian copper miner Oz Minerals has signed a deal with Sanjeev Gutpa’s Whyalla Port to export concentrate from its new Carrapateena mine.

The three-year contract is the first major deal SIMEC Mining has signed with a third party to export from the port, which services SIMEC’s South Australian haematite and magnetite iron ore mines as well as the Liberty steelmaking facilities in Whyalla.

Under the deal, secured containers of copper concentrate will be trucked 230km south from Carrapateena to Whyalla and shipped out in 5-10,000 tonne cargoes with annual shipments gradually increased in conjunction with the ramp‐up of the mine.

The copper gold mine produced its first concentrate in December. Production for 2020, as the ramp up progresses, is expected to be in the range of 20,000 to 25,000 tonnes of copper. Carrapateena is second in size to the state’s largest copper mine, BHP’s Olympic Dam, and has an expected mine life of at least 20 years. 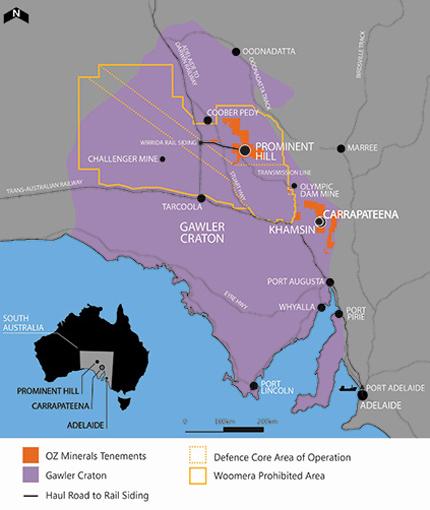 SIMEC Mining Executive Managing Director Matt Reed said he hoped the three-year deal could be extended for the life of the mine.

“We’ve stated for some time that our port is open for business, and the last few years have demonstrated that through the number and variety of trials we’ve undertaken,” Reed said.

“To take that to the next level and secure an ongoing contract is testament to our increased capability; and an exciting step in the evolution of the Whyalla Port.

“This contract justifies our investment in the port – particularly the installation of our state‐of‐the‐art mobile harbour crane – as this wouldn’t have been possible with our old facilities,” he said.

“We will be able to transport this material safely, efficiently and with a high standard of environmental care; and expect our performance to lead to further long‐term contracts in the near future.”

“We are impressed with the capability SIMEC has managed to develop through the facility in recent years, and look forward to partnering with them to deliver our product to market.”

He also revealed plans for a Direct Reduced Iron facility, and a new Electric Arc Furnace at Whyalla in addition to the heavy-section combination Rolling Mill previously announced to serve Australia’s rail, mining and infrastructure projects with domestic “GREENSTEEL”.