Pens and prospering as a manufacturer 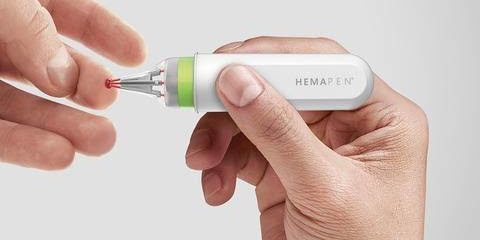 Trajan has been developing a world-first blood sampling device for several years. Brent Balinski spoke to company founder and chairman Stephen Tomisich about the hemaPEN – which is about to gain registration here and overseas – and where Australian companies can be competitive.

Over the years there have been plenty of opinions offered about the kinds of manufacturing that make sense – and those that don’t – within the Australian context.

It’s valid and useful to have a point of view on what works and what doesn’t, as well as a vision for the future. According to Stephen Tomisich, the founder and chairman of Trajan Scientific and Medical, success is all about dominating a niche market.

Trajan began in 2011 and employs 450 around the world — with more than 260 at its Melbourne headquarters, which is currently undergoing a three-year expansion project. The overriding vision of the company, and the focus of R&D, involves the importance of data in the future of healthcare.

“In particular data that relates to techniques that are known as chromatography and mass spectrometry,” Tomisich tells @AuManufacturing.

“Those techniques are increasingly finding their way towards the clinic and towards health care applications.”

Trajan creates analytical and healthcare equipment and technology. Current development work includes a micro-biopsy device (in collaboration with University of Queensland) and the hemaPEN project, which emerged from work by Dr Florian Lapierre at the ARC Training Centre for Portable Analytical Separation Technologies.

HemaPEN was announced in 2015, and inspired by a retractable pen. It allows blood to be collected – drawn through microcapillaries and isolated into incredibly precise measures – and deposited onto four pre-punched filter paper discs within the single-use device. These dried blood spot samples are sealed from contamination, can be removed, and can then mailed to a medical clinic. This removes the need for cold chain logistics or trips to a doctor.

The invention would be an important step towards personalised medicine, according to Trajan, and enable an unskilled operator (the patient) to take a credible sample for analysis.

“If we start to take samples and we’re looking to a world of preventative healthcare, it’s going to be about how you detect and notice trends or changes,” explains Tomisich.

“And if the data you’re collecting has noise or variation, then that will camouflage trends as they emerge.”

He says it’s hard to quantify the number of people within Trajan working to commercialise the product. They are spread around the world and people go on and off (for example in regulatory roles) the project. He estimates “a couple of million dollars” are invested annually on it.

A lot of work has gone into optimising precision-engineered features, such as the glass microfluidics, the surface chemistries of these, and the “smart polymer springs” that help deposit sample on substrate.

“As you can imagine the original concept we’d gone to pretty quickly, but then the refinement of various elements of the design to ensure that you are getting reliable performance for user to user and use to use was where all the hard work was,” Tomisich adds.

Prototype pens are manufactured in the thousands and used by researchers around the world currently, some of whom have helped validate the product through published studies.

According to the company it is at “MVP (minimum viable product) 1” one stage, and the approaching “MVP 2” phase will see production in the “hundreds of thousands.”

Also approaching is registration as a Class 1 blood collection and storage device in Australia by the year’s end. Registration is also expected by the European Medicines Agency by 2020, and by the US Food and Drug Administration early next year.

The company chose to not include a finger-prick device within the pen, as this would create another regulatory hurdle. Also, there is a broad range of requirements for lancets, which can be quite purpose-specific (depending on things such as the patient’s age and the sampling application) and there are already companies in the world devoting their resources to excellence in lancet manufacture.

It makes sense to focus on what you’re good at, says Tomisich.

On the topic, he offers a few thoughts on the kind of manufacturing that can prosper here.

“If we look… in our sector at the globally-successful Australian manufacturers – whether it’s ResMed or Cochlear – or at a company like Carbon Revolution, it’s all about domination of a niche segment that allows them to specialise and export to a global market,” Tomisich believes.