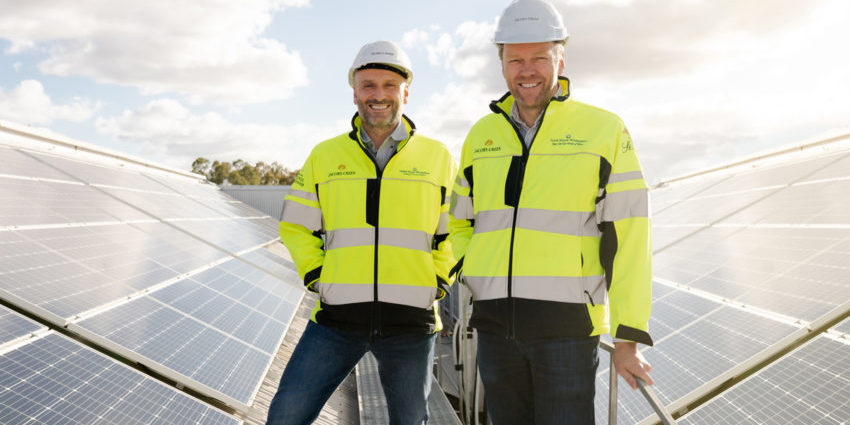 Energy company AGL has installed more than 10,300 solar panels across the company’s two Barossa Valley wineries in South Australia, with a predicted annual generation of 4,000 megawatt-hours.

The first 1MW stage of the company’s 2.8MW solar installation was switched on at its Rowland Flat winery in the Barossa about 12 months ago.

Pernod Ricard Winemakers last year also became the first wine company in South Australia to be connected to offsite wind and solar farms when it signed a landmark 10-year Virtual Generation Agreement (VGA) with wholesale electricity retailer Flow Power. The agreement means that the remainder of the business’ annual electricity requirements will be met by solar and wind.

Pernod Ricard Winemakers’ Chief Operations Officer Brett McKinnon, said the completion of the project demonstrated the company’s commitment to be a leader in sustainability and responsibility.

“Being sustainable and responsible is an important part of our business, particularly as producers of wine – a product that takes its character from the land where it was grown,” he said.

“We want to minimise our impact on the communities where we operate, responding to the local climate and preserving the environment for future generations to come.

“Our journey began in 2016 with a pilot solar installation after we recognised that we had a huge opportunity across our wineries to harness the power of the sun through solar panels.

“Three years later, we are exceptionally proud to say that we are now sourcing all electricity from renewable sources, in alignment with our global ambition.”

Other Pernod Ricard sustainability projects in South Australia include the restoration of Jacob’s Creek, recycling programs across all Barossa sites and the expansion of its Centenary Hill Vineyard Dam to provide a reliable water source.

It is also partnering with South Australian company Glaciem Cooling Technology to install a thermal battery and smart control system to an existing ammonia cooling system at its Rowland Flat site. The system will be used for process cooling and will be powered by the 2.8MW solar PV installation.

The state of South Australia is responsible for about half of Australia’s annual wine production and 80 per cent of its premium wine. Other major wine regions in the state include McLaren Vale, Clare Valley, Adelaide Hills, Coonawarra and Langhorne Creek.