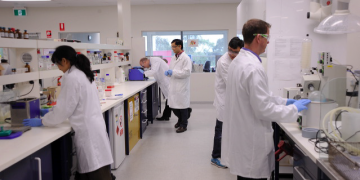 Sydney biotech drug developer and manufacturer, Pharmaxis (ASX: PXS) has secured a positive recommendation from a key US body for the benefits of its flagship Bronchitol drug in the treatment of adult cystic fibrosis.

The decision, from the Pulmonary‐Allergy Drugs Advisory Committee (PADAC), supported the approval for the use of the inhaled dry powder for managing cystic fibrosis in patients 18 years of age and older.

This is an essential step on the way to eventual sales in the United States – Bronchitol is sold in Australia, Europe, Russia and other smaller countries.

It also opened the way for a US$10 million ($14.1 million) milestone payment on launch and “mid-to-high-teen” percentage royalties on sales by its US-licensee, Chiesi Group.

Pharmaxis CEO Gary Philips said: “The committee vote is very encouraging, however, we are aware that these recommendations are not binding.

“Pharmaxis will continue to support Chiesi to work with the FDA to bring Bronchitol to patients in the US.”

The US FDA will make its final decision on the drug by mid-year.

Pharmaxis will manufacture Bronchitol at its Sydney factory for the US market and supply Chiesi.

Bronchitol is one of two products made and marketed by Pharmaxis – the second Aridol, a lung function test for asthma, is sold in Australia, Europe, the US and Asia

Pharmaxis also has a pipeline of other drugs going through the trials and approval process.

The trial was for patients diagnosed with diabetic retinopathy (DR).

A second trial of the drug is underway for non-alcoholic fatty liver disease (NASH).