Power play: despite the tough talk, the closure of Tiwai Point is far from a done deal 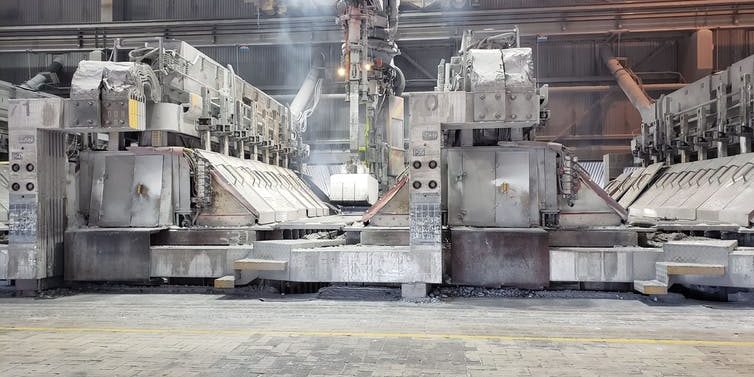 Another year, another round of hostage-taking by the owners of the Tiwai Point aluminium smelter.

As always, Rio Tinto has made the first move, threatening to close New Zealand Aluminium Smelters (NZAS) in Southland unless some ransom is paid. A thousand jobs would be lost, with a further 1,600 indirectly affected.

In the usual script the New Zealand government caves in and smelting rolls on while Rio Tinto and its local allies pocket their gains.

Will this time be different? As with any ransom demand, the questions are whether the threat is credible and how bad the consequences of refusing would be.

Will the smelter really close?

Cutting the smelter’s power price by a third is apparently the demand this time. Given the history (and the National Party’s unclear position) there is a real possibility the eventual outcome (after the election) could be another ransom payment and another few years of aluminium production.

A win for Rio Tinto could take several forms. The government could pay a cash ransom (as in 2013). Or Meridian Energy (supplier to Tiwai Point) could give up a chunk of its revenue. Or the big five electricity generators could share the ransom among themselves as a means of staving off a fall in residential power prices.

Alternatively, the Electricity Authority, always a compliant lapdog of the “gentailer” (generator-retailer) cartel, could provide the industry with cover by mandating price discounts for other power companies too.

If nobody blinks, we will find out whether the closure threat was really credible.

We can immediately set aside the smelter’s “NZ$46 million loss” declared for the past year. The accounts of both NZAS (the smelter operator) and Pacific Aluminium NZ Ltd are (quite legally) arranged to produce whatever profit/loss (and associated tax liability) the overseas owners want.

The final decision would be a strategic one for Rio Tinto: reputational benefits of being seen to punish a recalcitrant host economy, versus the loss of a renewables-powered smelter in an increasingly carbon-conscious world.

It really could go either way and I’m laying no bets.

How could we use the extra electricity?

We can, however, get a handle on possible policy responses to actual closure. The biggest impact, from which potentially big gains could come, is the freed-up electricity from the Manapouri power station.

Getting that amount of electricity (13% of the country’s entire consumption) to anywhere other than Bluff is not a simple matter, because it will need a new transmission line from Manapouri to Benmore or Christchurch. That line has never been built, and to build it now will take time and money.

Transpower is reported to be finally getting to work, but don’t expect an immediate result.

You might well think that building that line decades ago would have provided the New Zealand government with an essential bargaining chip (the “outside option” of reallocating the electricity if the smelter closed).

Certainly by failing to take that step, the state has declared a lack of will to resist ransom demands, which probably gave the smelter owners confidence in repeating those demands.

Suppose the line is built, what gain could residential consumers see? Well, it depends.

If the smelter’s contract is simply ended and Meridian is left looking for a new buyer, this might break the big-generator cartel and bring prices down. Or it might just lead to collective market manipulation to protect their share prices. (Contact is already talking of pausing a new geothermal project.)

What if the government became a player?

Alternatively, suppose the government summons up the courage to compulsorily acquire Rio Tinto’s contract rights (which run to 2030) and thus becomes the “single buyer” of 5,000 gigawatt hours (GWh) of electricity a year.

The government would then be able to dispose of this electricity as it sees fit. If it were to put the material well-being of households (in particular the poor ones) at the top of its priorities, it could supply those consumers with a fair chunk of their annual electricity consumption at a price far below the regular market wholesale price.

It could do this even within the current (deeply flawed) electricity market structure, leaving supply and demand to play out for the rest of the 40,000 GWh of annual generation.

Readers with long memories may recall the 1992 Hydro New Zealand proposal, which sought to protect vulnerable consumers from rising prices under corporatisation and privatisation by locking in just such a long-term, low-price “vesting contract”.

There is, however, a softer option open to the government, which would mollify Southland while leaving the crucial transmission line unbuilt.

That is the time-honoured Think Big tradition of installing some new, heavily subsidised giant electricity-using industry at Bluff – perhaps a “green hydrogen” plant, perhaps a data centre or even a Tesla “gigafactory”.

Remember, the government has a big stake in the profitability of three of the big generators. Watch this space – and don’t expect your power bills to come down any time soon.