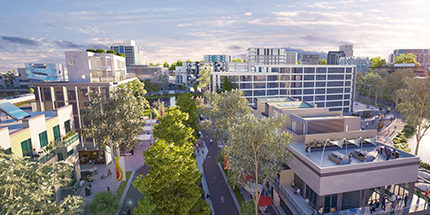 Composites manufacturer Quickstep has signed a letter of intent with the state government which could lead to its involvement in the Western Sydney Aerotropolis being planned around Sydney’s second airport.

Quickstep will work with the Western Parkland City Authority to identify synergies between their capabilities in aerospace manufacturing and the planned Advanced Manufacturing Research Facility (AMRF) at the new cityy.

The plan is for Quickstep, which manufactures space and aerospace composite structures at Bankstown airport in Sydney, becoming a participant once the facility is operational.

Minister for Western Sydney Stuart Ayres said: “We want the Western Parkland City to be a global leader in aerospace advanced manufacturing.

“To achieve that we will need to work with the best in class and there is no one better than Quickstep.”

Quickstep was originally a Perth company, but expanded to Bankstown when Boeing consolidated its manufacturing operations to Melbourne.

Quickstep CEO Mark Burgess said the opportunity to take part in the co-design of a world class advanced manufacturing facility, such as the AMRF, was too good to pass up.

Burgess said: “This is an exciting opportunity for Quickstep to leverage collaborative partnerships with global aerospace companies, strategic suppliers and world-renowned researchers in the context of a government-supported applied research facility.

“This initiative is well aligned to the NSW Government’s stated desire to develop and support advanced manufacturing in the State and fits perfectly with Quickstep’s pursuit of new business and accelerated research and development.”