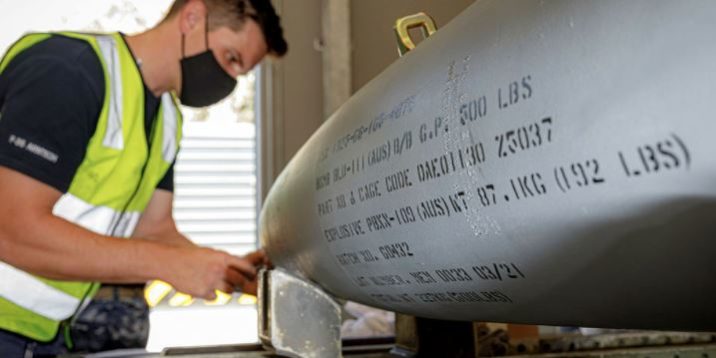 No. 81 Wing of the RAAF has accepted and and successfully ‘expended’ the first of a new type of Australian manufactured 500lb high-explosive warheads.

The first BLU-111(AUS)B/B bomb were delivered to No. 3 Squadron at RAAF Base Williamtown last year, where it was configured by armament technicians (pictured) as a Paveway II laser guided bomb before being loaded onto the F-35A Lightning II for a training sortie.

The BLU-111(AUS)B/B is a direct replacement for the older-generation Mk82 500lb warheads, delivering comparable performance while improving safety characteristics.

Squadron Leader Ryan Kell said once fully introduced into service, the BLU-111(AUS)B/B would be used as the go-to 500lb high-explosive warhead for the air force during operations and training exercises.

Squadron Leader Kell said: “The BLU-111(AUS)B/B is intended for use in both Paveway II laser guided bombs and the Joint Direct Attack Munition (JDAM) family of guided bombs.

“The development and production of the BLU-111(AUS)B/B has been an ongoing collaboration between the United States Government, defence and Australian… manufacturer, Australian Munitions.”

“The design is based on the US manufactured BLU-111B/B, but has been tailored to meet Australian production methods while providing improved safety characteristics.

“Aircraft bomb warheads have been produced in Australia for a number of decades, but the BLU-111(AUS)B/B warhead represents a generational change in explosives manufacture and safety technologies through use of a polymer-bonded explosive fill and design features which reduce the likelihood of the warhead detonating in the event of a safety incident.”

While initial use of the BLU-111(AUS)B/B is primarily by the F-35A, future use is likely to include the air force’s Hawk 127 lead-in fighter, F/A-18F Super Hornet and future platforms such as the MQ-9B Sky Guardian drone.

Australian Munitions production can act as a second line of supply to allied nations during operations or training, enhancing interoperability.