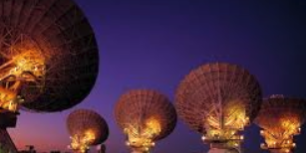 Two new instruments to be built for Australian radio astronomy facilities have the potential to create new spin-off industrial opportunities.

Australian Research Council Linkage Infrastructure, Equipment and Facilities (LIEF) grants have been awarded to develop a new receiver for the Parkes radio telescope, and a new digital signal processor for the Australia Telescope Compact Array near Narrabri in NSW (pictured).

While the economic payback for government grants is not always evident, radio physics has proved a seed technology for numerous industrial developments ranging from wireless local area networks (WLAN) to radars.

Director of CSIRO Astronomy and Space Science, Dr Douglas Bock, said that new ‘cryoPAF’ receiver technology to be installed at Parkes had the potential to create spin-off opportunities.

“Their further development at radio wavelengths has technology applications beyond radio astronomy with the potential to fuel the growth of space-related industries here in Australia.”

The Parkes upgrade attracted a $1.15 million LIEF grant which will support a $3 million project to build a cryoPAF receiver which will be cooled to minus 253⁰C to reduce noise in its electrical circuits.

Able to detect weak radio signals from the cosmos at frequencies from 700 MHz to 1.9 GHz, the receiver will be the work of the University of Western Australia and CSIRO which will design, build and install the instrument.

CSIRO has built numerous instruments for radio telescopes here and overseas since the 1940s, pushing scientific and industrial boundaries.

A second LIEF grant, worth $530,000, will support a $2.6 million GPU-powered processor to double the bandwidth of the Australia Telescope Compact Array at Narrarbri.

The project is being led by Professor Ray Norris from Western Sydney University, working closely with CSIRO and seven other university partners.