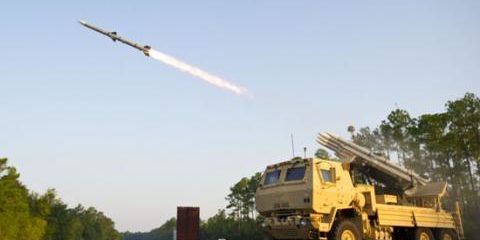 High technology defence contractor, Raytheon has begun construction of a $50 million factory, to be known as the Centre for Joint Integration.

The company, which holds a number of contracts with Defence, will manufacture a new short-range air defence missile system under a $2.5 billion contract.

The system is based on the Raytheon/Kongsberg National Advanced Surface to Air Missile System (NASAMS) but will incorporate radars and vehicles developed in Australia.

He announced that Australia’s version of NASAMS will use advanced radars designed and manufactured by Canberra-based company, CEA Technologies.

“The CEA radar that has been so successful on our ships will now be integrated into an Australian designed and built vehicle, the Thales Hawkei.”

CEA’s phased array radars are installed on Australia’s new Hobart class destroyers and are in the running to supply frigate major contracts in the UK and elsewhere.

The government expects local businesses to secure more than $1 billion of the cost of buying and maintaining the new air defence capability.

“It will accelerate growth in the defence sector and supports future Raytheon programs across maritime, aerospace, cyber and systems integration.”