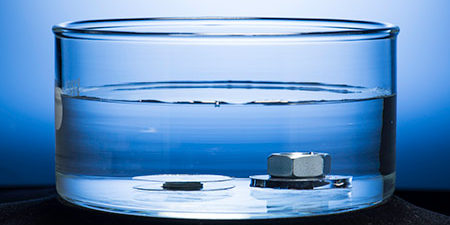 A University of Rochester team has developed a laser-etching technique and taken inspiration from fire ants and diving bell spiders to engineer water-repellent, buoyant metal structures.

The work creates “multifaceted superhydrophobic (SH) surfaces” on metals. The technique to etch metal was described in a 2015 paper as using, “extremely powerful, but ultra-short, laser pulses to change the surface of the metals. A femtosecond laser pulse lasts on the order of a quadrillionth of a second but reaches a peak power equivalent to that of the entire power grid of North America during its short burst.”

The recent improvement used more powerful lasers to improve the speed of etching. It also borrowed from nature, such as the way diving bell spiders and fire ants trap air to stay buoyant, to avoid structures getting water-logged. Fire ants “can form a raft by trapping air among their superhydrophobic bodies.”

The work, led by professor of optics and physics at University of Rochester Chunlei Guo and published in ACS Applied Materials and Interfaces, is described as creating “a structure in which the treated surfaces on two parallel aluminum plates face inward, not outward, so they are enclosed and free from external wear and abrasion. The surfaces are separated by just the right distance to trap and hold enough air to keep the structure floating—in essence creating a waterproof compartment.” 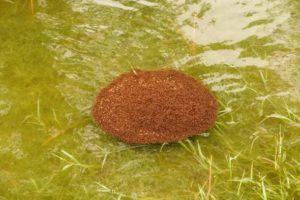 This aluminium structures remained submerged for two months, but retained their ability to float to the surface, and even after puncturing multiple times, “because air remains trapped in remaining parts of the compartment or adjoining structures.”

The statement speculates that the technique could maybe be used to create an unsinkable ship, a flotation device that works after being punctured, or electronic devices that can survive in the ocean for long periods.

Featured picture: Superhydrophobic metallic structure is weighed down to keep it submerged in water in the Guo lab. Even after two months, it will bounce back to the surface. (University of Rochester)