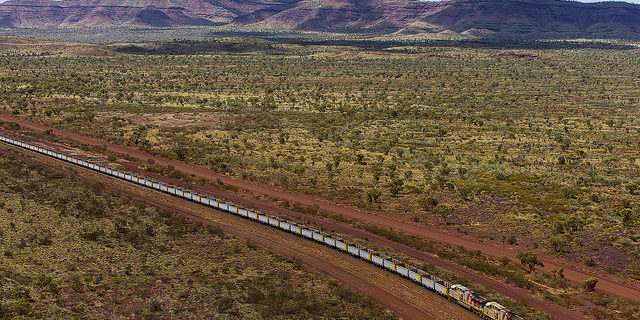 After a build up from running its first autonomous train in July, the company has announced the system is now fully operational.

The company operates more than 34 autonomous train services a day in the Pilbara, monitored and controlled remotely from its Perth operations centre, 1,500 kilometres distant.

Each train has been described as a giant robot, but in fact they are more akin to a Toyota car assembly plant – a typical modern factory.

The autonomous train, consisting of three locomotives and carrying around 28,000 tonnes of iron ore, are the latest element of Rio’s vision of its WA iron ore operations as a single, connected, series of automated processes.

Individual processes such as mine bore hole drilling, explosives filling, in-mine haulage and ship-loading have long been automated and controlled as a single sequence of steps from Perth.

In the best traditions of lean manufacturing, the process is initiated or ‘pulled’ by the imminent arrival of a ship destined for a particular customer, rather then ore simply being ‘pushed’ by production.

“It’s been a challenging journey to automate a rail network of this size and scale in a remote location like the Pilbara, but early results indicate significant potential to improve productivity, providing increased system flexibility and reducing bottlenecks.”

More than one million kilometres has now been covered by the trains which aim to improve safety and productivity, optimising the company’s iron ore mine to ship logistics system.

Automation to this level owes much to Sam Walsh who launched his ‘mine of the future’ programme when CEO in 2008.

He came from an automotive manufacturing background as boss of Nissan Australia and forged close ties with the University of Sydney’s Australian Centre for Field Robotics, and local engineering firms and suppliers.