Robern Menz begins exports of Violet Crumble to the US 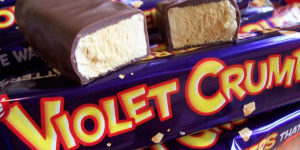 Robern Menz announced in January that it would acquire Violet Crumble from Nestle, and began production of the iconic honeycomb and chocolate bars in October using the product’s original recipe. It is the first time the chocolates had been owned by an Australian company in 46 years.

The Australian reports that the shipment of 14 pallets of Violet Crumble, weighing five tonnes in total, will be transported to San Francisco and Los Angeles. These will be sold at outlets including 7-Eleven and Cost Plus World Market.

Robern Menz’s factory in Adelaide’s east has undergone a recent $4 million extension, and a reported 30 new jobs have resulted from the purchase of Violet Crumble from Nestle. Phil Sims, CEO of the fourth-generation confectionery company, said there was a strategic focus to grow internationally through countries such as the US, using the popular “Brand Australia” image.