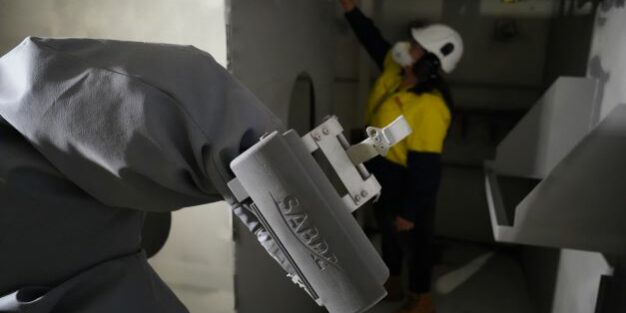 The company that developed autonomous robotic blast technologies to remove paint from the Sydney Harbour Bridge has demonstrated how the same system could be used on the Hunter class frigate and other maritime programs.

Sydney based Burwell Technologies demonstrated the capability of its blast and paint robot to work in a confined, shipbuilding space while performing abrasive blasting in tests held in Adelaide.

The company utilised two replica steel ship blocks which were built to test new processes and technologies that could be deployed by BAE Systems Australia on the Hunter Class Frigate Program.

The replica ship modules were built by Adelaide-based shipbuilder MG Engineering, which is vying for a role in the Hunter program.

Burwell Technologies CEO Damian Williams said: “We’re extremely pleased with the results and outcomes of the second round of trials of our robotic blast technology with BAE Systems for the Hunter Class Frigate Program.

“Having proved our robots’ capabilities for this application gives us great optimism of seeing our technology used to reduce human exposure to abrasive blasting and increase productivity.”

Abrasive blasting is a hazardous process that involves propelling steel grit at speeds of up to 675 km/h to remove contaminants such as rust and paint, before the surface is recoated.

“The Osborne Naval Shipyard is a proving ground for Australian innovation before it is used on BAE Systems programs, either here Australia or overseas.”