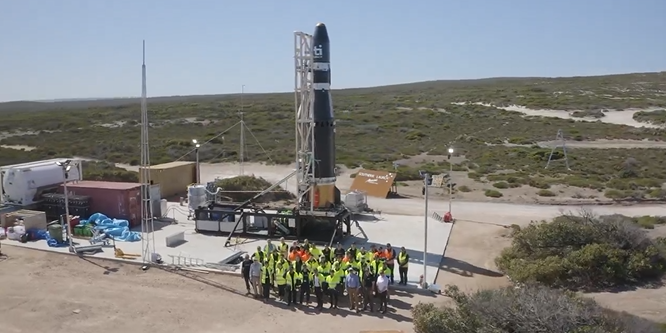 A Taiwanese Australian attempt to launch a 10 metre two-stage rocket into orbit has ended in tragedy at the Whalers Way Orbital Launch Complex near Port Lincoln in South Australia.

The launch site operator Southern Launch announced that at 4:09 pm (ACST) the company and TiSPACE attempted to launch the Hapith I rocket (pictured) from the launch pad.

“The fire was contained to the launch pad and was attended to by the South Australian Country Fire Service, who were onsite.

“No people or the environment were put at risk.”

The accident appears to have stymied what would have been the largest rocket to be launched from Australia since the days of the Woomera rocket range involvement in UK missile development.

Previously the launch had been interrupted by high winds at altitude and when an internal fault in the rocket aborted a countdown.