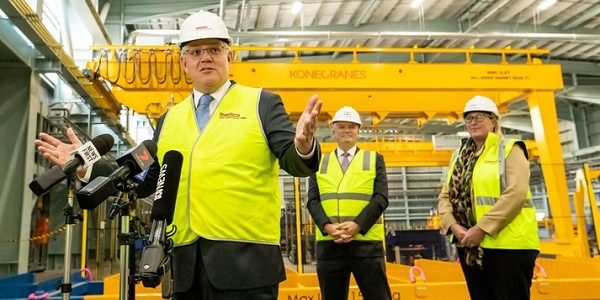 All the signs are bad for any small hope we may have had that the six industry growth centres would be replaced by something more like the highly successful UK Catapult centres or German Fraunhofer Institutes.

The signs coming from Canberra are that no-one is pushing for an extension of the growth centres, flawed in design though they are, and most certainly the department and minister are not considering a redesign of the scheme to bring it up to world’s best practice.

While some of the growth centres are making plans for a life beyond the ending of government funding, the government’s own review of the scheme says it is unlikely any will survive in anything like their current form.

This means that $800 million in the forward estimates is to be dispensed in the way that the Department of Industry, Science, Energy and Resources has apparently wanted for a very long time – by direct government grants.

Only this time the Prime Minister Scott Morrison and his office has stepped in and the PM himself will sign off on every dollar of government funding going out the door.

On recent form, the best we can hope for is that the majority of this enormous pot of money will go to support truly transformative investments.

But some, perhaps a hell of a lot, perhaps a couple of hundred million dollars, will be dispensed in exactly the same way the PM and his team have dispensed other recent grants schemes.

For example the Australian National Audit Office in its review of the Community Sport Infrastructure Grant Program said in conclusion number one: “The award of grant funding was not informed by an appropriate assessment process and sound advice.”

ANAO also found: “Funding decisions for each of the three rounds were not informed by clear advice and were not consistent with the program guidelines.”

And: “…the Minister’s Office had commenced its own assessment process to identify which applications should be awarded funding. The Minister’s Office drew upon considerations other than those identified in the program guidelines, such as the location of projects, and also applied considerations that were inconsistent with the published guidelines. It was this assessment process that predominantly informed the Minister’s funding decisions, rather than Sport Australia’s process.”

So now are we going to see manufacturing grants decided on recommendations from Coalition ministers and MPs, and even candidates?

Are we going to see grants going to projects that do not meet any of the advertised criteria for the schemes?

Are we even going to see grants going to companies that have not even applied for a grant at the time the press release is issued by the government?

This is one god almighty large slush fund and we can only hope that in this case the nation’s genuine interests are put first and not those of some MP in a marginal seat.

We will be watching this space.