Scott Morrison is hiding behind future technologies, when we should just deploy what already exists 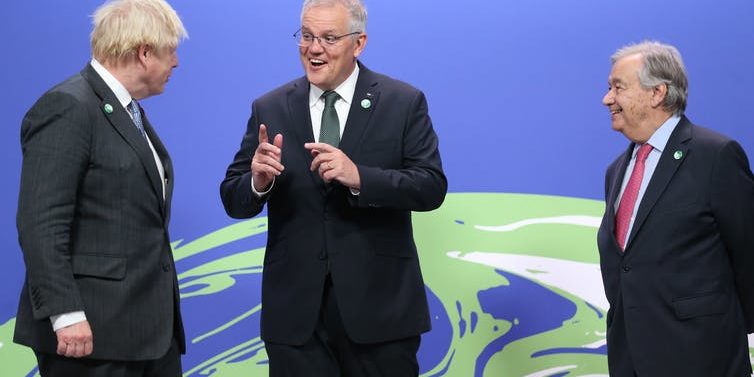 By Simon Holmes à Court, The University of Melbourne

At the United Nations climate summit in Glasgow last week, more than 40 countries pledged to phase out coal-fired power. Some were big coal-using countries such as Poland, Canada and Vietnam – however Australia was not among them. Australia was similarly absent for a methane reduction pledge.

Achieving the Paris Agreement — limiting global warming to well below 2℃ and preferably 1.5℃ — requires the rapid phase out of coal, oil and fossil gas. Failure to do so will spell the end of the Great Barrier Reef and make a large swathe of Australia virtually unlivable.

Yet the Morrison government’s technology-driven net-zero “plan” contains no concrete measures to end this fossil fuel addiction. It’s more a placeholder than a strategy, fulfilling the government’s need to have a document to wave around. Meanwhile, the government seems intent on sitting back and letting the future happen, rather than creating it.

I’ve spent 25 years working and investing in technology commercialisation, focusing over the past 15 years on clean technologies. I know Australia doesn’t need to wait for new technology before committing to and achieving deep emissions cuts. Most technologies we need already exist – they just need to be deployed, rapidly and at massive scale. And that requires an actual plan.

We have the technology

The Morrison government’s path to reach net-zero by 2050 relies primarily on technology, but fails to even remotely outline what that would mean in practice.

A total of 70% of the emissions cuts would purportedly be achieved by technology “investment”, “trends” and “breakthroughs”. But it’s not technology per se that reduces emissions, it’s deploying it.

The government missed the opportunity to explain decarbonisation at its simplest: electrify everything we can, and power it with renewables.

Some 84% of Australia’s emissions come from activities related to the energy sector. Recent overseas analysis shows electrification could replace 78% of energy emissions using established technologies. Add technologies being developed, and the figure rises to 99%.

Hydrogen, one of the government’s technologies du jour, is likely to play a modest but important role in domestic decarbonisation. And if we don’t get left behind, it could become a significant export earner.

But what’s required in the near term is much more boring: build lots of wind, solar and storage, retire coal and gas as soon as possible, and electrify transport and heating.

Carbon capture and storage (CCS), a favourite of Australian governments for decades, remains a distraction. First, since CCS adds significant cost but no benefit to a process, it will always require either a carbon price or regulations to be viable. Second, while CCS may play a role at the margins in areas where emissions are hard to abate, such as cement production, its only significant role for coal and gas is as a fig leaf for inaction.

Green steel could be a significant opportunity for Australia, given our abundance of iron ore and access to low-cost clean energy. But while Australia dips a toe in the water, overseas companies like SSAB and Volvo are demonstrating that the days of metalurgical coal — one of Australia’s biggest exports — are numbered.

Clearly, the technologies are here. What we need is deployment.

A decade ago, energy from wind and solar was significantly more expensive than from coal and gas. But renewables are now the cheapest form of new energy, even including additional costs such as energy storage and transmission.

Renewable energy’s fast fall in price was due to a mix of well-designed government policies and massive private investment, both here and around the world.

The Commonwealth’s Renewable Energy Target, for example, required electricity retailers to purchase a small but increasing amount of renewable energy each year, in a way that did not significantly affect energy affordability. With renewables now at a lower cost than new coal and gas, that early investment is paying dividends.

When Henry Ford released the Model T in 1908 his horseless carriage was imperfect and expensive. Yet it kicked off a process of technological improvement in which each successive generation of cars has learnt lessons from those which came before.

If federal Energy Minister Angus Taylor time-travelled back to 1908, would he advise Ford not to release the Model T until it resembled the Tesla Model S?

Most economists agree the most efficient way to reduce emissions is to put a price on carbon and let the market respond. More than a decade of toxic Australian politics has poisoned that well. It leaves policymakers with few tools, and politicians with even fewer ideas.

In the absence of an explicit carbon pricing scheme, the federal government should set clear emissions reduction targets in each sector of the economy.

Monash University’s ClimateWorks has developed a plan for doing so. Such a plan, with an added combination of policy “carrots” (subsidies or incentives) and “sticks” (regulations or taxes) would ensure emissions reduction targets are met.

Our lowest hanging fruit would include a carefully managed coal phase-out and policies to rapidly electrify transport and heating, using existing technologies. This would help us hit meaningful 2030 emissions reduction targets consistent with the Paris Agreement.

Meanwhile, we sit on the cusp of what is almost certainly Australia’s biggest ever investment opportunity. Our wide brown land is chock full of the critical minerals needed in a decarbonising world — lithium, nickel, cobalt, rare earth metals and silicon. Moreover, our windswept and sun-drenched plains are ready to produce the low-cost energy required to locally transform these raw minerals into valuable refined materials.

Our state governments, some having committed to net-zero five years ago, are making progress – particularly in electricity. But complementary and coordinated policies at the federal level would almost certainly make progress faster — and cheaper.

The coal and methane pledges at COP26 shows many of the world’s most emissions-intensive economies are ready to make the transition. Meanwhile, the federal government’s so-called “plan” prevents Australia from claiming our place in the sun, and wind.