Should Australia have an independent space capability? 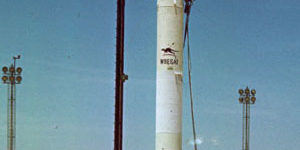 Labor’s suggestion at the recent election that Australia should own merchant ships has sparked discussion among experts about what other areas of critical infrastructure should be brought within Australia’s control.

While the opposition’s idea that Australia needed domestically-owned ships that could be requisitioned during times of emergency failed to move the electorate, some think the core idea has great merit but in other areas.

Writing in The Strategist, published by the Australian Strategic Policy Institute, Lauren Hanley argues for local control of space infrastructure such as satellites.

Hanley, an ANU research intern at ASPI, said 99 per cent of Australian Defence Force capability was dependent on space technologies, most of which is sourced from the United States and dependent on US satellites.

This need not have been the case since we enjoyed an early lead in space technologies, including launching our own satellites such as Wresat from Woomera as far back as 1968.

She said: “Large US satellites are vulnerable to attack, and any reduction in their capacity would pose an enormous challenge for the ADF.

“While we undoubtedly need to further develop our domestic capabilities and invest in capacity building in conjunction with the commercial sector, we should also be looking to build a safety net to offset the effects of such an attack.

“Requisitioning could provide this short-term solution.”

The Australian Space Agency, unlike our defence focused effort in the 1960s, supports the growth of the civil space sector, is not dependent on government funding and is driven by commercial and research interests.

Two space ports are being built in the Northern Territory and South Australia, and there are numerous young companies in rocket, satellite, and data related areas such as agriculture utilising the industrial internet of things (IoT).

This is occurring as the ADF is moving into the development of unmanned aerial vehicles, artificial intelligence and cyberwar capabilities.

Hanley argues that Australia needs to ensure that our strategic interests are secured and our defensive capabilities do not continue to rely on access to a single source for information, navigation and communication.

“The centrality of space technology to our defence capability requires more attention to be paid to its development and the possible future needs of an increasingly tech-based force.

“Requisitioning with agreed levels of remuneration would remove this barrier and ensure that in times of national need the ADF can still operate at full capacity.”

Defence/Wresat on the launch pad, Woomera, 1968