Silex Systems presses ahead in nuclear enrichment, will Australia follow? 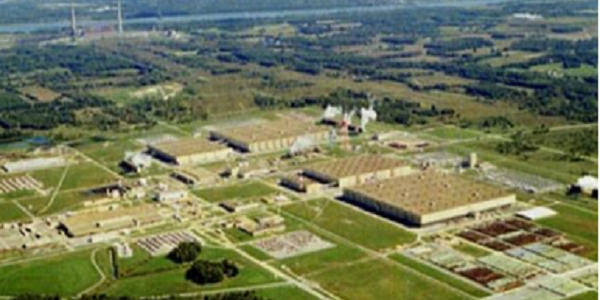 Technology development company Silex Systems is pressing ahead with a uranium enrichment project that has implications for any future move by Australia into nuclear industries.

The Sydney company has signed a sales agreement with the US Department of Energy (DOE) to allow it to process stockpiles of depleted nuclear fuels as part of its Paduach Project in Kentucky (plant site pctured).

Silex plans to process the fuels using its proprietary laser enrichment process being commercialised in partnership with Canada’s Cameco Corporation, with the partners producing uranium equivalent to one of the world’s top ten uranium mines.

While the commercialisation of the Silex process has been troubled in the past, the implications of an Australian company with the capabilities to enrich uranium could be a building block to a future nuclear fuels industry in Australia.

There is mounting pressure from the defence community to establish nuclear weapons capabilities in Australia, with defence analysts pointing to a need for greater self-reliance given the eclipse of US power in the region.

This is often connected in defence commentary to the upgrading of the Attack class submarines to be built in Adelaide from conventional to nuclear propulsion, a technology leap the French builder could easily manage.

Finally, while much of the conservative push-back against renewables has focused on using gas and coal, nuclear power is always high on the wish-list of many on the political right.

The Silex project involves the construction by GLE, a venture owned 51 per cent by Silex and 49 per cent by Cameco, of the Paducah Laser Enrichment Facility to process depleted uranium over a period of several decades.

Production would begin in the late 2020s of around 2,000 tonnes of natural uranium hexafluoride per annum, the equivalent of a mine producing 5.2 million pounds of uranum oxide.

Silex was formerly developing the project in association with GE and Hitachi, who exited the project allowing Cameco, one of the world’s largest listed uraniium companies, to increase its holding.

Silex is based at Lucas Heights in New South Wales, the site of Australia’s only nuclear reactor, and works closely with the Australian Nuclear Science and Technology Organisation (ANSTO).

Interestingly Silex is also central to another developing Australian industry – the company is producing treated silicons being used in developing and making silicon quantum computer chips.

It has been estimated that to move into nuclear power Australia would need a concerted national effort over seven to 10 years to train nuclear technicians, perform the necessary science and construct facilities.

The advent of Silex as a capable uranium producer and enricher would make such a move all the easier and quicker.

While my personal opinion is we should avoid the nuclear industry given its risks, there is no doubt Australia could easily attain nuclear capabilties.

All that is lacking is political will.