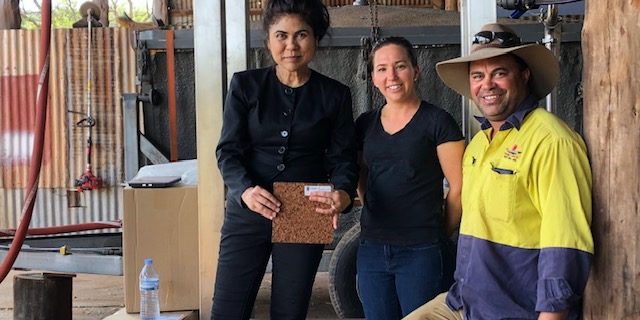 Dubbo’s Native Secrets has caught a whiff of interest in their essential oils and skincare products lately. Co-founder Phil Thompson reckons they are about to break through as a supplier to a multinational hospitality company.

“We’ve just positioned ourselves perfectly to start tendering some of the bigger works, particularly targeting hotel chains” he tells @AuManufacturing.

Thompson’s company helps maintain Alkane Resources 1,021 hectares of biodiversity offset area. They thin the white cypress pine population, help restore the habitat of creatures such as the threatened pink-tail worm-lizard, and turn the heartwood and leaves into high-value products.

It’s a model that could be replicated in any number of mines, believes Thompson, whose company currently supplies to Qantas for its overnight delay bags.

“My dream is to work with abandoned mine sites and set up distillations and plantations where we can rehabilitate the mine and it will sustain itself because we’ll grow native species which has an oil value with it,” he says.

“So we can put this model in any community, particularly where there’s a mine or an abandoned mine and it will sustain itself because we’ll be making oils and potentially cosmetics.”

Thompson began the company with wife Cherie in 2014, with whom he also runs MOB Personnel Solutions.

While providing labour for an LNG project in Queensland, Thompson noticed a gulf between black and white workers on the camp site. He thought the best way to address this would be to farm and use native plants his culture had used for thousands of years for their therapeutic properties. Growing up in Barcaldine, he had seen that some of the best conversations between black and white had been around bush tucker and medicine. And through his dad, Thompson had learned a few things about traditional remedies using plants like gumby gumby.

“What happened on the mine camp was 1,500 people, there was about 20 black people. All 20 black people sat at one end. Everyone else, the other end,” he recalls.

“We made all that soap, the mining boom crashed, and that project never went ahead, but I had a whole heap of soap [laughs]. But we also realised there’s a niche in the market and people loved the story.”

In the last year they have invested in a new boiler, producing around five or six litres of white cypress oil per day, roughly a quarter of capacity. This is then sent to manufacturing partner Essential Oils Australia to be processed.

A recent project has been an informal collaboration with University of NSW’s Sustainable Materials Research and Technology (SMaRT) Centre. Bio-waste from manufacturing has been reclaimed and turned into building tiles.

Professor Veena Sahajwalla, founder of SMaRT, says potential exists to build on the company’s story by turning these fibres into boutique products, which include the residual wood oil’s scent and natural anti-termite properties.

“All of that to me is again part of that sustainability story, that you can actually use a lot of natural properties that are there in the materials and if you can then incorporate that into building products,” she tells @AuManufacturing, adding that there is often untapped value in the waste a company produces.

“If you can develop that as another core product, then you’re increasing revenue potential for your business.”