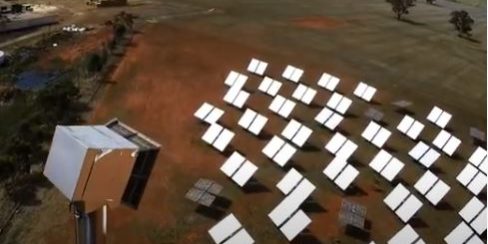 Solar photovoltaics (PV) and wind continue to be the cheapest sources of new electricity generation capacity in Australia, even when the integration costs of renewables are included, according to a report released today by CSIRO and the Australian Energy Market Operator (AEMO).

Their final 2020-21 GenCost Report, released today estimates the cost to generate electricity for new power plants in Australia, with the latest report using a new, more accurate approach that adds in ‘integration’ costs such as storage and new transmission infrastructure.

The report found solar and wind continue to be the cheapest sources of new-build electricity generation, and comes as AGL announced plans to build a solar-and-hydro energy station at its Liddell coal-fired power station which is slated for closure in 2023.

AGL has been collaborating with Melbourne-based developer RayGen on a concentrated solar thermal project, which uses a field of mirrors to reflect sunlight (pictured) onto a receiver, where it is used to store energy in a reservoir.

Construction has already begun on phase one of the project – a solar-hydro plant in Carwarp in Victoria.

This report concludes that:

The report includes hydrogen electrolysers for the first time and finds that hydrogen is following a similar trajectory to more established renewables.

With increased interest in global deployment, and many demonstration projects worldwide, substantial cost reductions in hydrogen technologies are expected.