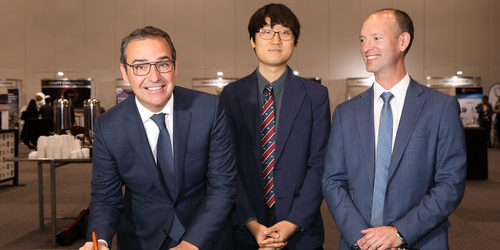 Southern Launch which is developing the Whalers Way Orbital Launch Complex on Eyre Peninsula in South Australia has signed up its first rocket launch customer.

Southern Launch signed an agreement today at an international space conference in Adelaide with Perigee Aerospace of Daejeon, South Korea.

Perigee is developing the Blue Whale micro launch vehicle, which will carry small satellites into Sun-Synchronous Orbit by the end of 2021 from the SA site.

The company is venture capital funded by investors including Samsung Venture Investments and LB Investment, a subsidiary of LG.

Whalers Bay is suitable for launching polar orbiting satellites southwards out over the Great Australian Bight.

This will complement equatorial launch facilities being developed in northern Australia.

The signing was made by Southern Launch CEO Lloyd Damp and Perigee CEO Yoon Shin, and was witnessed by SA Premier, Steven Marshall.

Damp said: “Perigee Aerospace shares our key values of efficient operations and high levels of safety for both the public and the environment.

“This signing establishes a partnership based on trust and implicit understandings about their usage of our launch site.”

Perigee’s Shin said Whalers Bay was a perfect match for its micro-lift rocket.

“We look forward to launching our rocket from Australia in the near future.”