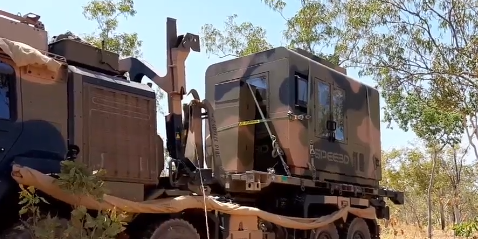 A ‘WarpSPEE3D’ 3D metal printer has been camouflaged as it continues to be deployed and put through its paces by the Australian Army in the extreme heat and humidity of the Northern Territory.

Made by SPEE3D, the WarpSPEE3D uses cold spray technology for faster and more cost-effective metal part production at speeds of 100 grams per minute.

The printer arrived in Darwin in early June as part of a $1.5 million, 12-month trial and was first deployed painted the company’s characteristic bright red.

The machine has since received a number of upgrades and modifications and has produced military parts in temperatures up to 37 degrees Celsius and 80 per cent humidity.

“This two-week trial demonstrates the WarpSPEE3D is a robust workhorse that is capable of printing real parts and solving real problems in the field.

“It also proves that soldiers can take control of the whole workflow of creating the spare parts they need, from design to printing and post-processing, right here where they need them.”

SPEE3D partnered with the Advanced Manufacturing Alliance (AMA) and Charles Darwin University (CDU) to deliver the programme with soldiers from the Australian Army’s 1st Brigade training in 3D printing at CDU since February.