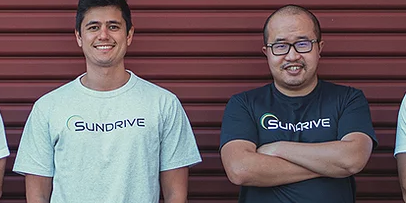 Sydney solar cell manufacturing start-up SunDrive Solar has claimed a new world record, producing a solar cell with an efficiency at turning sunlight into electricity for a commercial-size silicon solar cell of 25.54 per cent.

This surpasses the most efficient cell known preciously which was produced by Longi Solar.

SunDrive’s new cell is doubly important as it is produced with copper rather than expensive silver, promising future cost reductions in manufacture.

The efficiency was confirmed by Germany’s Institute for Solar Energy Research (ISFH).

The technology start-up took to Linkedin to announce the record: “SunDrive has officially set a new world record for a commercial size silicon solar cell.

“A proud milestone for the team that worked incredibly hard to achieve this.”

Founded by Vince Allen and David Hu in 2015, SunDrive is backed by technology billionaire Mike Cannon-Brookes, the Australian Renewable Energy Agency (ARENA) and Blackbird Ventures who have invested in the company.

SunDrive initially aims to use its technology to focus on the rooftop solar sector, where space is at a premium and higher efficiency cells can produce greater amounts of energy for a given footprint.

SunDrive CEO Vince Allen has previously told @AuManufacturing the technology presented an opportunity in Australia to lead the world in creating the best version of next generation solar cells.

“Our goal is to use the learnings from this project to bring to life a superior solar technology, creating new local industries which can compete on the global stage.

“With only three per cent of world electricity coming from solar today, there is still so much innovation that must occur.”

According to ARENA, a key barrier to the broader adoption of next generation solar cell technologies is the use of silver, which accounts for an estimated 20 per cent of annual global industrial silver consumption.

“This will be exacerbated as the industry attempts to move to higher efficiency cell structures which require two to three times more silver per cell, presenting an ongoing supply risk if solar demand is to grow five-fold as predicted within the next decade.”