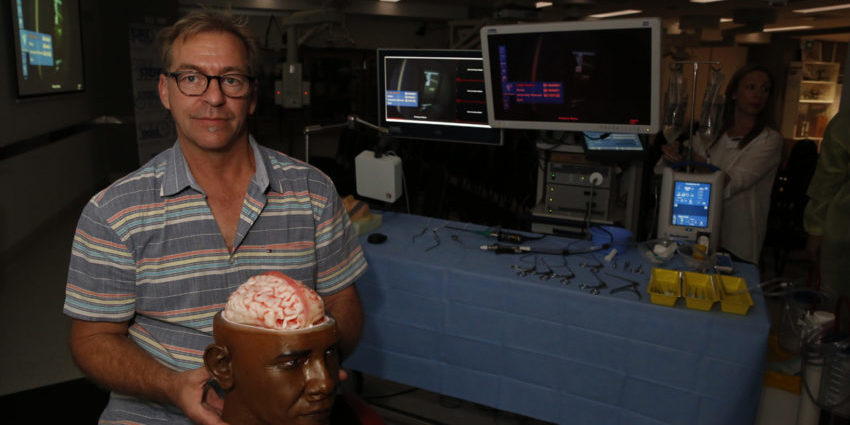 The University of Adelaide course has been run for 22 years by leading sinus surgeon Professor PJ Wormald but is using the 3D-printed models with lifelike bone, skin and muscle densities for the first time.

The course has attracted experienced surgeons from around the world, a number of whom are looking to run similar courses in their home countries using the 3D-printed models.

Fusetec is also working on several other human models including a full head for neurosurgeon training. The head and brain prototype has been made as a model of former American President Barack Obama.

The great breakthrough with Fusetec’s models is the life-like texture of each layer, such as skin, tissue and bone to make for a realistic surgical experience.

The three-day University of Adelaide course is being attended by 40 surgeons from around the world, who will all perform four different sinus procedures using the Fusetec models.

The first commercial course to use the Fusetec models took place in Montreal, Canada, in September with a similar course held a few weeks later in New Orleans in the United States. 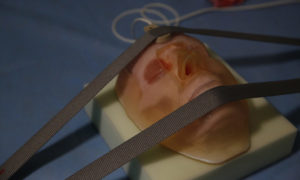 Previous training courses have typically used cadavers, which can be difficult to get and usually do not have major health complications.

Professor Wormald is a world leading sinus surgeon at The Queen Elizabeth Hospital, Royal Adelaide Hospital and the ENT Professor at the University of Adelaide.

He said the 3D printed models could be reproduced identically for each course member and made from CT scans to have real complications such as the presence of tumours.

“What we are able to do now with the 3D printed models is give everyone the same specimen with the same difficulty and we can really monitor the same surgical technique and really teach them the steps they need to do,” Professor Wormald said.

“It’s a different learning experience. Now you’re able to give them context and the opportunity to learn difficult techniques on difficult anatomy, which just wasn’t possible before because cadavers generally have very straightforward and simple anatomies.

“This is the biggest course that’s ever been run in the world because we’ve got 40 dissection stations – the biggest ones previously had 20-25 – so we’ve got a huge amount of material and equipment here. Because we are able to use 3D printed models now we are able to give everyone the same anatomy and difficulty with their dissection so that’s really been the key the difference.”

Surgeons have come to the course from around the world including China, Japan, Taiwan, Malaysia, India, Singapore, Chile, UK, Canada, USA and Austria.

The 3D-printed models can also be made for individual patients to allow surgeons to practise the specific procedure before putting the patient under the knife.

Professor Wormald said the use of the models had not changed the price of the course but meant that participants could now perform four surgeries each rather than sharing one cadaver between two as had sometimes been the case in the past.

He said he expected 3D models to be predominantly used for the training of medical students and surgeons in the future.

“We’ve got attendees here at the moment from Japan, Taiwan, Chile, India and China who are all going to be running courses in the next 12 months with these 3D-printed models but they needed to be convinced that it was a good idea and it was going to work because everyone is so welded on to this idea that cadavers are the only way to teach,” he said.

“Because we are able to use 3D-printed models now we are able to give everyone the same anatomy and difficulty with their dissection so that’s really been the key the difference.”

Fusetec CEO Mark Roe will fly to Saudi Arabia in the coming days for another course next week. He said he was also in discussions with several multinationals. 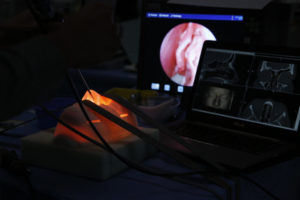 Picture: A surgeon performs a sinus procedure on a 3D-printed model at the University of Adelaide. (Ben Kelly)

New models being developed by Fusetec include an ear, thorax, eye and five different heart pathologies.

The first brain dissection on the prototype 3D-printed Obama head was carried out this week by Royal Adelaide Hospital neurosurgeon Dr Adam Wells, who will help develop the head until it is realistic enough to train surgeons at a high degree of difficulty.

Roe said the feedback had been very positive from surgeons who had been trained using the 3D-printed models so far.

He said Barack Obama’s likeness was used for the prototype out of respect for the former President.

“We think he’s a statesman and a great leader and he was a supporter of technology so we chose him as our No.1 favourite person in the world,” Roe said.

“We had CT scans and MRIs of real patients who were de-identified and then we created Obama’s face from photographs.

“It’s a one-off just for prototyping so when we go to market we’ll have to seek someone’s permission to use their facial features or we’ll make our own features.”

The brain is very soft and is covered in spinal fluid when you open it up.

“The next two models we’re doing for PJ (Wormald), he wants them to bleed when they dissect them,” Roe said.

“We’ve already developed a heart pump with a pulse and blood flow rate and that will be used on the noses and the brain.”

Production of the 3D-printed models in Adelaide is currently keeping up with demand but Roe is looking for investors to help scale up the business as the products gain further traction.

Featured picture: Fusetec CEO Mark Roe with the prototype neurosurgery model, which is based on a likeness of former US President Barack Obama (Ben Kelly)