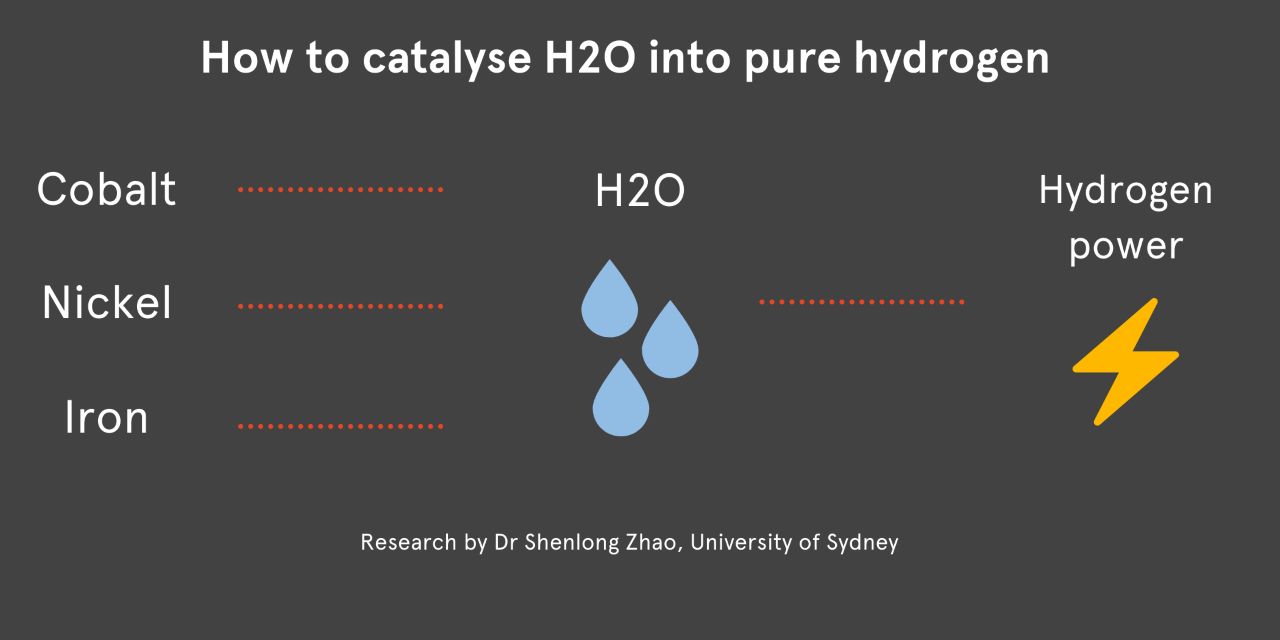 Sydney researchers have announced a much more efficient means of turning water into pure hydrogen which is increasingly looking like the gaseous fuel likely to displace fossil fuel LNG in Australia’s export mix.

The University of Sydney researchers, in a paper published in the journal Nature Energy, have created an efficient water-splitting catalyst that requires less energy to produce pure hydrogen than earlier catalysts.

Catalysts speed up or slow down chemical reactions, but are not themselves consumed in the process.

A team of engineers led by FH Loxton Research Fellow Dr Shenlong Zhao from the School of Chemical and Biomolecular Engineering believe investment and research will usher in a new age of truly transformative renewable energy.

Head of the School Professor Dianne Wiley said: “Our team has developed an exciting new catalyst based on iron, cobalt and nickel that can be used to create pure hydrogen.”

The researchers used nickel, iron and cobalt to create a series of porous, metal-organic framework nanocrystals, which presented a unique atomic structure and many exposed surfaces throughout the material.

The framework successfully catalysed a reaction using less energy than catalysts that use more expensive materials. The catalyst also showed very little loss in activity in a 150-hour stability test.

While plans are progressing in a number of Australian states to use solar PV and wind energy to split H2O into H2 and oxygen, the precious metals, like platinum or ruthenium, normally used as catalysts and expensive and rare.

Dr Zhao said: “Improvements in energy conversion and storage are absolutely essential for a successful and sustainable energy economy.

The team now hopes to work with a collaborator to build a larger-scale device.