The Race to Invest in the Space – infographic 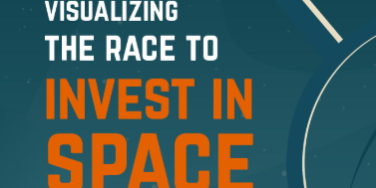 Humans have long viewed outer space as the final frontier.

Our thirst for exploration has brought whole nations together to create more advanced technologies─all in the pursuit of discovering the outer reaches of the universe.

Today’s infographic from Visual Capitalist and ProcureAM highlights the exciting journey humans have taken into outer space, and the economic boom across industries as a result of this quest for discovery.

With an ever-expanding universe, how far have we gone?

Our Connection with Outer Space

Humans have been fascinated with space for millennia, using the planets and stars to navigate, keep time, and discover scientific facts about the universe.

Since the 1960s, humans have also been traveling into space and pushing the limits of our technological and physical boundaries with each excursion.

A Brief History: Humans in Space

Nations around the world have used these trips and technological milestones to drastically improve life.

The Space Economy is Ready for Lift-off

This sector drives the majority of commercial activity in the space industry.

These products and services meet specific needs in telecommunications, location-based services, and monitoring and observation.

Production of space vehicles such as rockets and rovers, ground and space stations, and receivers such as satellites, receivers, and terminals for internet and TV are also booming.

As the global population grows, our need to stay connected to each other evolves.

Most modern government space agencies are actively monitoring and tracking space to offer better resources and services for their citizens, including geopolitical monitoring and missile tracking.

The Next Frontier: Investing in Space

This meteoric growth is due to fewer barriers in the space industry, which was previously restricted to governments or the ultra-wealthy.

Private sector companies are responsible for much of the growth. Since 2000, Goldman Sachs estimates that $13.3 billion has been invested into newly launched space startups.

These companies, backed by titans such as Jeff Bezos and Elon Musk, are pledging to support innovations from the practical to the fantastical, to boldly go where none have gone before:

While costs are still astronomical, Blue Origin and Virgin Atlantic are banking on the idea of the first space vacations taking place as early as 2020─and growing in popularity from there.

Dennis Tito paid $20 million to become the first space tourist in 2001
Prepaid tickets for 90-min suborbital flights in 2020 with Virgin Galactic are going for $250,000.

The Future of the Space Economy

Advances in satellite and rocket technology mean that costs are declining across the entire commercial space economy.

Because of this, the global space industry may jump light years ahead in the next few decades.