Two year old Q-CTRL, a spin-off from the University of Sydney’s Quantum Science group, has raised $22 million in venture capital to advance its work.

This investment, one of the largest VC deals this year, places Q-CTRL in the top 10 most successful fundraisers globally in the emerging quantum technology industry.

Q-CTRL founder Professor Michael Biercuk said: “This funding is an exceptional acknowledgement of the value we are adding to the quantum community and a statement of support for our global ambitions.”

Meanwhile a second company Archer Exploration (ASX: AXE) has listed on the stock exchange and announced progress in constructing a quantum device capable of storing information in the form of qubits.

Archer announced it has assembled the first qubit component of a prototype room-temperature operating quibit processor.

He said: “However, we have unambiguously achieved this making it possible to scale our chip quibits.”

Choucair previously worked at the University of Sydney and his company operates out of the university’s nanoscience hub. His group was awarded a $15,000 NSW Government grant recently. 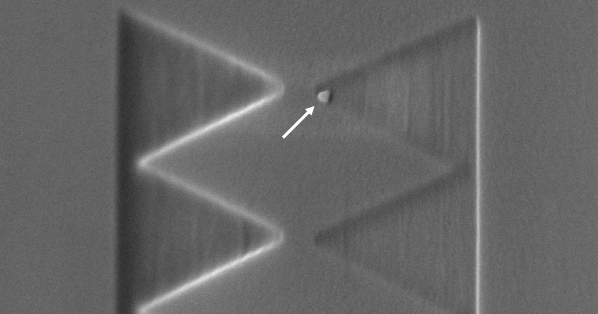 Picture shows a single quibit of 50 nanometres size positioned by Archer on a silicon wafer.

Archer made no mention in its announcement of the much more difficult task, achieved by the University of Sydney, or storing and retrieving information based on electron position.

Both companies are racing global leaders such as IBM, Rigetti and Google which have developed computers that can rub for very short times before failing.

All are tackling the fragility of these novel devices and their control software.

Q-CTRL is by far the most experienced, is better resourced scientifically and financially, and is firmly based within the University of Sydney.

Q-CTRL already has a range of quantum computing control software products on the market.

Q-CTRL has Rigetti, Bleximo, Accenture and others as customers. Last year it was chosen as the first company outside North America to be included in IBM’s Q Network of start-ups working to advance the emerging quantum computing industry.

“It will also support geographic expansion to include a new office in Los Angeles, bringing Q-CTRL staff closer to core customers in the US. It’s a thrilling time for the team and this emerging industry.”